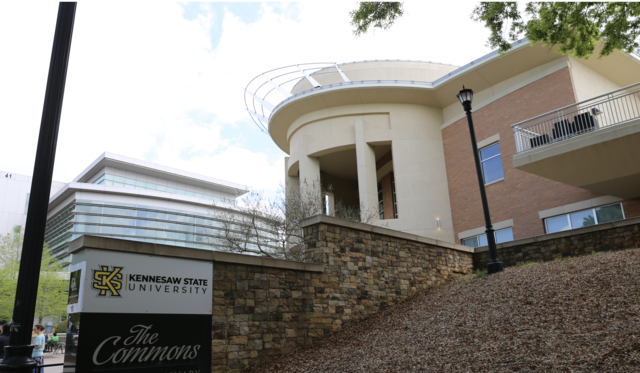 Kennesaw State University was ranked No. 13 on Niche’s 2023 best college foods in America.

Niche ranks universities through analysis of data provided by the U.S. Department of Education and self-reported student reviews. The ranking factors both student accessibility to healthy food choices and meal plan costs. KSU’s dining halls have landed the public college a high ranking across the nationwide comparison.

“As a freshman, I genuinely enjoyed the fresh and wide range of food choices offered in The Commons. Each day, I had the opportunity to try something new and exciting,” Current student Nicholas Nettles said, “Although I’ve repeatedly eaten there, I do think some improvements can be made to improve the quality and the menu offered.”

KSU hosts two dining halls between both campuses. The Commons is located on the Kennesaw campus and Stingers on the Marietta campus.

The Commons has nine stations for students to choose from. Apron Strings includes homecooked southern meals and is famous for its Fried Chicken Thursdays. Hwy 41 is an American food station while Globe Trotter features different foods from around the world. The Commons also includes Piatti’s, Miso Caliente, The Campus Green and the Stone Mill Bakery. The Grind Coffee Co. offers coffee, lattes, tea, hot chocolate, frappuccinos, cappuccinos and smoothies

Stingers also has different stations that are similar to The Commons for students to choose from like Down Home, Blue Print Deli, My Pantry, Farm Basket, World Fare and Slice of Pi.

“I’m not surprised that KSU has been named #13 in the nation because I do enjoy the variety of food there each time I come in.” Current student Tyler De Austria said. “Although I think the Commons has much more to offer than Stingers, I still like Stingers because the sandwich station is always ready to make my favorite wraps.”

Some students, however, were unsure about the high ranking that the halls received.

“I definitely don’t think it deserves No. 13 in the nation. While it’s good, it’s hard to imagine all but 13 dining halls are worse,” Current student Gracie Evans said, “My favorite thing about the food at the Commons is the variety, it’s nice to have all of the choices.”

A unique feature of KSU’s dining halls is the many events they hold. Stingers has a unique event called Stingers Steakhouse. It is held on different dates throughout the semester and features high-end foods like steak, mashed potatoes, green beans, and a special dessert. Students must use two extra meal swipes to receive an entry.

Events that both of the dining halls host are Friendsgiving, Holiday “Break” Sale, Taco Tuesday and a campus-wide favorite, Cram Jam. These events encourage students to socialize and make the most of their experience here at KSU.