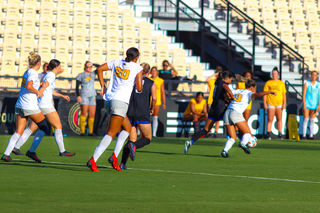 Women’s soccer lost 7-0 against the University of Georgia on Sept. 4 at Fifth Third Bank Stadium.

With this loss, KSU’s record against Georgia drops to 1-1 all-time at home.

In the opening 12 minutes, Georgia’s Mallie Mackenzie and Joyelle Washington scored, creating an early 2-0 lead against the Owls. With three more goals added to their collection in the first half, the Bulldogs took a 5-0 lead into halftime.

The Owls didn’t fare much better in the second half as UGA’s Dani Murguiaand Dasia Torbert added to the Bulldogs’ tally and put them ahead 7-0.

The Owls defense held Georgia to only two goals throughout the final 45 minutes, despite previously allowing 17 shot attempts from the Bulldogs in the second half. Kaylee Hammer‘s resilience showed through a new career-high of nine saves during the game.

For the entirety of the night, the Owls were only able to attempt seven shots with one on goal, along with two corners.  Macie Rainwater‘s two shots led the team for the evening. Georgia ended the game with a total of 31 shots, with 16 of those on target.

The Bulldogs are not the only team with new players. This year, KSU is a very young team after welcoming a number of freshmen.

In order for the team to improve for the remainder of the season, the Owls have to find a way to cohesively and consistently dominate defensively. Finding ways to stop opponents will limit the opposing team’s gameplay which will open up the opportunity for KSU to capitalize on other team’s mistakes.

The Owls will soon begin their ASUN streak, playing their biggest opponents of the season. KSU will face their first ASUN opponent, Jacksonville State Gamecocks, on Sept. 18 on the road in Jacksonville, AL at 2 p.m. Tune into ESPN+ to access the game.