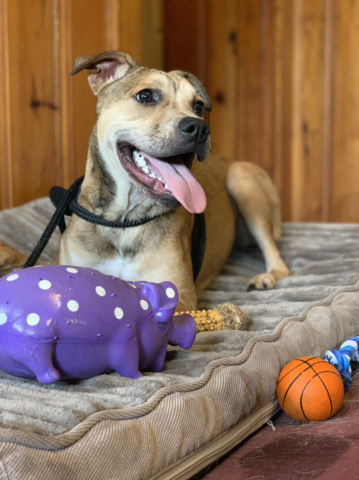 Dogs over 25 pounds and all cats are now ready to find their ‘fur’ever home for a $20 adoption fee throughout this month. The adoption special is called ‘Fall in love with a new furry friend‘ and follows a national increase in pet surrenders that occurred over the summer.

Kennel Supervisor Jason Perkins said that on average, 7,000 animals are brought into the shelter annually.

“Usually things on average are here for about 11 days before they either get rescued or adopted out,” Perkins said. “Which is pretty good because any animal that comes in we assume that there is an owner out there somewhere that’s looking for it, so we have to give them a minimum of seven days to give them that chance.”

Perkins explained that in one case, a dog was in the shelter for over eight months. This isn’t ideal as the shelter’s main goal is to help find these animals a loving forever home with responsible owners, according to their website.

“Volunteers walk them every single day, we do a pretty good job taking care of them. But we could never be a home. We could never replace that,” he said.

The bonding room is a private space in the shelter where people looking to adopt can spend one-on-one time with some of the animals and even introduce their current pets to an animal they’re looking to adopt. In this controlled environment, it’s a safe space for the owner to gauge whether or not an animal is right for them before making a final decision on the adoption.

There is a common misconception that there that animals in the shelter are subjected to a lonely future, but according to Perkins that fortunately isn’t the case.

“I know a lot of people walk in here and they think that Sarah McLachlan is gonna be singing in the arms of an angel constantly, but I wouldn’t be able to do this job if it was as bleak as a lot of people think,” Perkins said.

The shelter is always welcoming new volunteers. Those interested in volunteering must be 18 years or older and will be sent an orientation video to begin their training process. Volunteers also have to fill out a Volunteer Form and review the Volunteer Handbook before working with animals. Volunteers then shadow an officer and learn about what it’s like to be in the shelter and care for these animals.

As a public service, the shelter also provides rabies shots, microchips and spay and neuter services. According to Perkins, some specialized rescues will often keep in close contact with shelters in order to take in dogs so the animals can have a better chance to find a safe home.

To learn more about dogs that are available for adoption who have been in the shelter for an extended period of time, check the Cobb County Animal Shelter’s Instagram page @cobbcountyanimalservicesor their website for more information. Those who are unable to adopt but would still like to help the shelter can donate through their website as well.