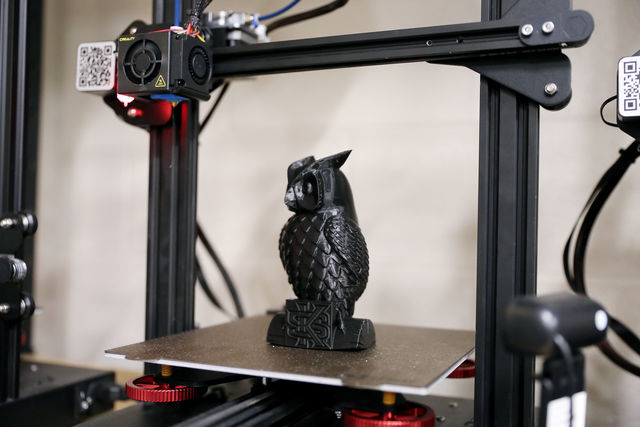 Kennesaw State University’s campus-wide 3D Printing Ecosystem expanded to include the Burrus Building’s 3D Center for use by all students.

The 3DPE is a collective of 3D printing labs encompassing five fields of study: art, business, architecture, engineering and social sciences. With such revolutionary technology at their disposal, the colleges can use printers as an extension of the principles of their study, according to student assistant Allie Benoit.

“Animation can print out figures, or architecture will print out model houses; engineering will test parts and make gears,” Benoit said.

The 3D Center, located in room 465 of the Burrus Building, is the most recent of these labs to be established, working closely with the Coles Business School.

While the other departments use the printers as a way to reinforce their core concepts, the 3D Center works to prepare its visitors for 3D printing in future applications.

“We focus on simpler prints here, it’s more about introducing business students to the concepts of 3D interaction in general and the 3D printers in particular,” 3D Center research assistant Will Smith said, “In addition to the printers themselves, we also do research into things like virtual reality and augmented reality and just general immersive technologies.”

Studying in a technology-based field isn’t required to use one of the school’s printer labs. Students who are interested could join the Makerspace Collective, a club that specializes in familiarizing students with emerging technologies in Visual Arts. This includes 3D printing and scanning as well as Computer-Aided Design and Manufacturing.

“I think it is steadily growing. I’m very happy that word is getting around and people are coming in, showing cool stuff that they make,” MakerSpace Collective president and KSU senior Paige Ealy said, “And with our 3D modeling class, they also go upstairs and use the 3D printers to print out the projects that they make themselves, which is really cool. So that’s also another way to introduce people to the realm of 3D printing.”

Those looking to join the Makerspace Collective can attend their meetings every Thursday at 12 p.m. in room 223 of the Visual Arts building. Students can also use the 3D Center’s printers for personal prints, like shirts and minifigures.

There is a fee associated based on the amount of filament used per print. Those using the 3D Center for introductory work will receive an access code worth $25 of filament for their prints, essentially making their initial project free. Large personal prints using more filament will be charged $20 per roll, according to lab assistant Rohit Gibson.

According to a 2022 FormLabs study, 40% of responding manufacturers have adopted 3D printers for business use; the industry for 3D printers has also seen a marked increase of 19.8% in 2021according to Engineering.com. Alternate reality and virtual reality have likewise seen a recent increase in demand, with Globe NewsWire expecting the former’s value to exceed $90 billion and the latter’s to approach $84 billion, both by 2028.