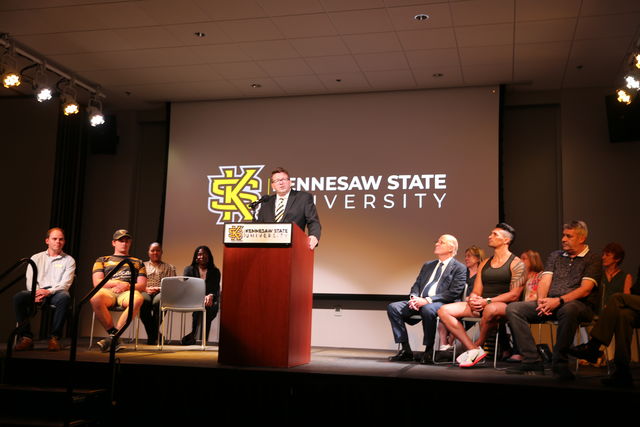 The Division of Global Affairs declared the fall semester to be The Year of New Zealand with an opening ceremony on Aug. 23 in the Carmichael Student Center.

The Kahurangi Māori Dance Theater provided a video of their performance of the Wero, a challenge to test visitors’ intentions by wielding weapons and laying down a Taonga, or prized item. The guest of honor, True, accepted the Taonga on behalf of the school.

“This gift endows Kennesaw with a focus to keep moving forward, overcome challenges with respect and humility, peace and integrity and the willingness to create new friendships,” Latham said.

To commemorate this year and the ceremony, this intricately carved symbol is being framed and will be on display in the Global Education suite of the Academic Learning Center.

“In its beautiful form and in its story the taonga embodies the spirit of Kennesaw’s year of New Zealand,” Consul Latham said.

The Kahurangi Māori Dance Theater performed the Haka Powhiri dance they prepared specifically for KSU as a ceremonial welcome. Speakers Latham, Subritzky and True then led the remainder of the ceremony.

The year of New Zealand is part of the award-winning “Year Of” program at Kennesaw that has been in place since 1984. This program includes several multi-disciplinary events that encapsulate each featured country.

“Today, we looked more at the past and the culture, but it’s not just about that,” True said, “It’s about education on the whole identity, their economic, political and cultural systems.”

The event’s organization was in great part by Vivian Pascual and Lola Owokoniran. Owokoniran and Pascual are the Director and Program Manager of Community Engagement & Outreach of KSU Global Education, respectively.

The opening ceremony was just the beginning of a year full of events demonstrating what New Zealand offers. Upcoming events include two film screenings: Trailblazers: The New Zealand Story on Sept. 30, and The Lord of the Rings on Dec. 2. Students can also gain insight into New Zealand’s economic structures and developments with guest lecturer economist David Teece on Oct. 3.

For sports fans and foodies, the KSU Rugby team will play against Alabama on Sept. 1 and will be catered with meat pies and sausage rolls.

These events present a fun way to engage with different cultures on campus. For more information on the Year of New Zealand and other upcoming events, follow Kennesaw’s Global Education Division.