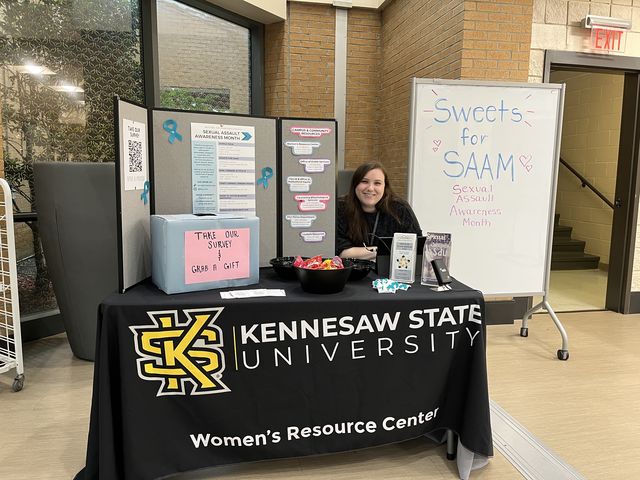 The Women’s Resource Center informed students about campus and community resources geared toward preventing sexual assault and contributing to the awareness of it on April 6.

Passersby who stopped at the table were offered a variety of sweets that included cupcakes from Nothing Bundt Cakes and an assortment of candy bars. The event was named “Sweets for SAAM (Sexual Assault Awareness Month)” but sweets were not the only prizes offered.

Students were also offered pins and stickers to wear throughout the duration of April to show their support. The stickers depicted teal ribbons, the ribbons associated with Sexual Assault Awareness Month and Take Back the Night, a charitable organization and movement against sexual violence.

Another prize offered was the Nightcap drink spiking prevention scrunchie that acts as a discrete drink cover to combat spiking and then converts into a sleek scrunchie.

Abigail Flagg, the Program Coordinator of the Women’s Resource Center, informed students of the many resources available to them on campus including the Office of Victim Services, Counseling Services and the Office of Institutional Equity.

Flagg had brochures for students, one about sexual assault on college campuses and busting myths about sexual violence by defining the terms of it, such as consent.

Another brochure was on the Office of Victim Services and all the support they offer survivors of assault such as placing Temporary Protective Orders, helping students report to Campus Safety and providing medical referrals. These brochures may be found in the Women’s Resource Center in the student center, Room 164.

Sexual assault awareness is an important topic, especially in regard to prevention, and the Women’s Resource Center intends to continue to spread awareness throughout April with several events.

On April 13 the center will host a craft corner in which participants will paint rocks with encouraging messages about consent called “Consent Rocks!”

On April 27 they will hold Denim Day on the Green where students will have the ability to decorate denim patches and write letters to survivors of sexual assault. Denim Day is nationally recognized and all are encouraged to wear denim to show support for survivors. You can find their full calendar of events here.

Flagg wishes to facilitate an environment in which “interpersonal violence isn’t tolerated.”

“We all play a role in preventing sexual assault on campus,” Flagg said.

The safety measures taken by the Women’s Resource Center and the Cultural and Community Centers as a whole certainly play a large role in the awareness on campus.