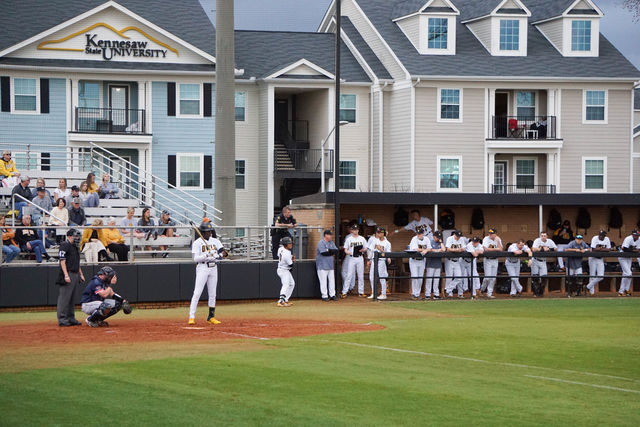 The Owls currently have a season record of 16-7 and improved their conference record to 6-0 on March 27. This is the first time KSU has won its first six conference games in its D1 program history.

While the first game in the series was a relatively stress-free 10-6 victory for the Owls, the rest of the series showcased two huge comebacks. The second game saw the Owls falling behind 8-2 at the start of the fifth. In the final game of the series, North Florida took a 7-0 lead at the top of the second.

KSU rallied back in the second game after scoring seven runs in the bottom of the fifth, winning the game by a score of 17-9.

In the final game against North Florida, KSU scored 13 unanswered runs, including seven in the bottom of the seventh. This is KSU’s largest comeback of the season.

“I talked to the team before the game about finishing the series strong,” head coach Ryan Coe said. “I know we didn’t get off to a great start, but the way we battled back and secured the sweep shows what this team is made of.”

Over the series, KSU completed a total of 47 hits and 40 runs. This included senior Josh Hatcher completing his second cycle in three games on March 26.

Hatcher completed his first cycle just three days prior on March 23 against Georgia Tech where the Owls won 14-12. He is the first Owl in the program’s Division 1 history to complete a cycle.

Hatcher’s second cycle against North Florida helped the Owls pull off their second victory of the series, adding five RBIs and three runs in the game.

“It’s hard enough to get one cycle, let alone two in the same week,” Coe said. “I have no clue if that has ever been done before. What Hatcher did was incredible.”

The Owls saw several players play a big role in their two comeback wins. Sophomore Zac Corbin recorded seven runs, seven hits and five RBIs over the series. In the final game, Corbin hit a grand slam in the seventh inning giving the Owls a 13-9 lead.

Sophomore pitcher Brayden Eidson also played a pivotal role in the final game of the series. Coming in as a relief pitcher during the top of the first, Eidson played a career-high 7.1 innings. He allowed only one earned run on two hits, striking out four.

“For him to get us through almost eight innings while giving us a chance to come back, I am extremely proud of him,” Coe said. “He attacked hitters and kept us in the ballgame, it was an awesome performance.”

Sophomore Donovan Cash got his fourth consecutive game with multiple hits in the final game of the series. He finished against North Florida with seven hits and three runs.

“I am proud of the way our guys battled,” Coe said. “We stayed with our approach and kept chipping at the lead. There was never a doubt in our dugout that we couldn’t come back.”

KSU will look to improve on its 16-7 overall record in a home game against USC-Upstate on March 29 at Stillwell Stadium.

On April 1, the Owls will look to add to their 6-0 ASUN win streak with a three-game series in Fort Myers, Florida against FGCU.