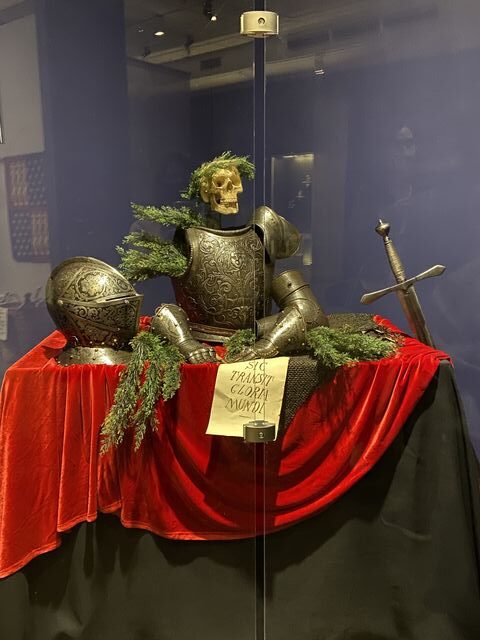 Arts & Living
The Fernbank Museum exhibit will run until May 15. Photo: Anna Shoup

The exhibition room first displays individual items of suits in glass cases to properly show the engravings and embossing on the steel or bronze items. These indents or raised portions consist of depictions of instruments, plants, animals and sometimes monogrammed initials.

These helmets, breastplates, elbow-cops and more are from Museo Stibbert, a museum in Florence, Italy that lent the artifacts to Fernbank Museum. Each artifact was uniquely crafted in shape and imagery. Over time, armor production became respected as an art practice rather than viewed as a simple trade because of the attention to detail seen in every piece.

In the next room of the exhibit stood two fully assembled suits of armor mounted atop life-size figures of horses. Even the horses were suited with their own helmets and caparisons, or colorful saddlecloths. Horses’ protective and decorative gear was referred to as barding and the combined set of armor for a knight and his horse is called a garniture.

According to Fernbank Museum, these full-body suits were worn as military uniforms on the battlefield as well as for protection in social jousting matches, then called parade armor.

An addition that jousting knights sporadically made to their armor was the attachment of women’s handkerchiefs. Women would gift their handkerchiefs or veils to the knights as tokens of their favor for winning jousts. The handkerchiefs and veils given were called favors, and knights would attach them to their helmets or jousting rods, called lances.

On battlefields, knights were equipped with swords instead of lances. Just as each metal armor piece was individually decorated, their swords were decorated as well. These swords were shown in the next glass cases: some with hooks protruding from the sides, some modeled after farming tools to easily penetrate armor and all with elaborate handles and engravings on the blades.

In the last stop along the Knights in Armor wrap-around room was a showcase of shields, appropriately shown next to the swords they may have clashed. Shields ranged from teardrop shapes to cross-like shapes and were made mainly from copper or silver.

The exhibit is deeply informative with plaques describing each piece and with wall excerpts on the history and culture of knights. It also houses artifacts that are interesting to observe for people without extensive knowledge of the history of knights.

The exhibit will be open until May 15, and Fernbank Museum is open 10-5 p.m. every day. Tickets for the Knights in Armor exhibit are included with general admission for sale on Fernbank Museum’s website.