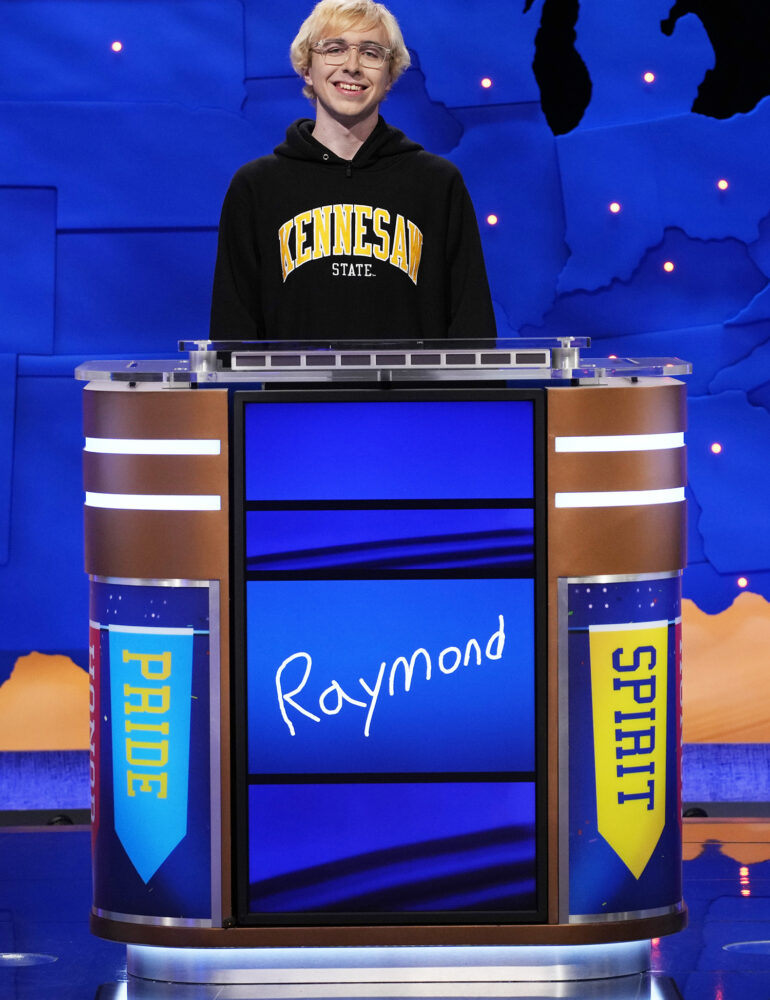 Raymond Goslow will be representing Kennesaw State as he takes on students from some of the top schools in the country during the Jeopardy! National College Championship.

Goslow graduated in December 2021 with a degree in geospatial science. Since the show was taped in the fall, he was allowed to participate in the undergraduate tournament.

In an interview with The Sentinel, Goslow stated that he has been a lifelong fan and that he had tried to be on the show several times. Between October 2020 and September 2021, Goslow went through a series of tests and interviews with Jeopardy! to be in the tournament.

Finally, in September 2021, Goslow received the call. He had made it to the show.

“I was with my boyfriend at the time and I got the call,” Goslow said. “I just put the phone down and was like ‘I’m going to be on Jeopardy!’ and it was just really fun and happy.”

This will be the first time KSU is represented in the 32-year history of the tournament, which features students from some of the top colleges and universities in the nation. According to Jeopardy!, this year’s tournament features contestants representing Harvard, MIT, Stanford and Duke among others.

“I felt a little out of my depth at first,” Goslow admitted. “Like an odd duck, especially because I took most of my classes online and I was working full time.”

Despite the differences he found among his fellow contestants, Goslow also described several instances where he was able to relate to them.

“We could talk about writing essays and doing projects, and that didn’t really feel that different even if they were going to schools that more people had heard of… it doesn’t feel like KSU is inferior in any way and hopefully my being up there on the stage with everyone will show that,” he said.

Goslow also stated that he had formed a “tight-knit group” with his fellow contestants, and remains in contact with them to this day.

Goslow said that he started using Rubik’s Cubes when he found one in the toy aisle at Walmart that said it came with instructions.

“I love to follow instructions, so I bought it, read the instructions, managed to solve it the first time, looked up faster methods on YouTube and here I am today,” he said.

Goslow’s first tournament was Michigan May Madness 2014 where he competed in four different contests. In 2018, he was America’s third-fastest Rubik’s Cube foot solver. Now, he is training to become a WCA delegate so that he can organize cubing competitions on his own.

With KSU being such a large university, Goslow acknowledges that it can be difficult to find something to unify around amidst such diversity. His message to his fellow owls is simple: “Even if it feels like you’re lost in the big melting pot that is KSU, remember that we’re all here for the same reason: to know more things.”