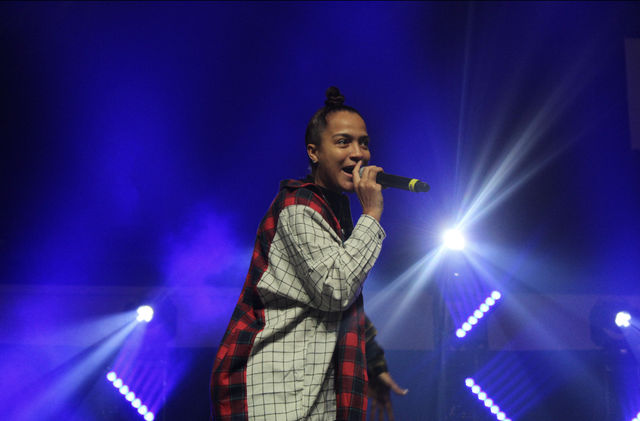 At 7 p.m. that Wednesday, students filled up the bleachers around the basketball court in the Convocation Center, spilling into the the area in front of the stage. The stage set-up included dazzling strobe lights which shone into the crowds on all sides.

Checking into the concert required electronic tickets that were free for current students and $20 for KSU alumni, confirmed with KSU Talon Cards at the entrance. Students had to go through body scan machines and have their bags checked by security workers. Those who had bags larger than clutches had to carry their belongings and their bags separately in clear zip lock bags. Masks were not required, and most students came in unmasked for the event.

The concert opened with DJ Shalé energizing the crowd with a mix of top hits from various genres, mostly featuring rap and R&B. She engaged everyone, causing students all over the auditorium to stand up and sing and dance along to the songs. DJ Shalé danced all over the stage as the intensity of the bass shook the seats.

For the last song with DJ Shalé, students were asked to turn on their phone lights for added lighting effect to go with the music.

After the song ended with a brief intermission, McDuffie and KC took over the stage to call up the KSU Activities Board members.

Nine members went up on the stage to briefly introduce themselves and to thank everyone for attending. KC took over the stage again, playing a few more songs and engaging the crowd in noise contests to get them ready for Earthgang.

Another intermission followed, and then the Earthgang duo entered the stage, immediately launching into one of their songs. Almost all the audience members stood up and screamed when they came onto the stage. They talked to the crowd after the first song and made the audience even more excited, launching into their next song soon after.

While security guards observed from nearly every corner of the room, students reacted to the music by dancing in the aisles and going down into the front of stage crowd to participate in group and line dancing. The concert continued with Earthgang’s lively act until 10 p.m.

The KSU Activities Board’s upcoming events are the Halloween Silent Disco Costume Event on Oct. 26 and a Talent Show on Nov. 16.