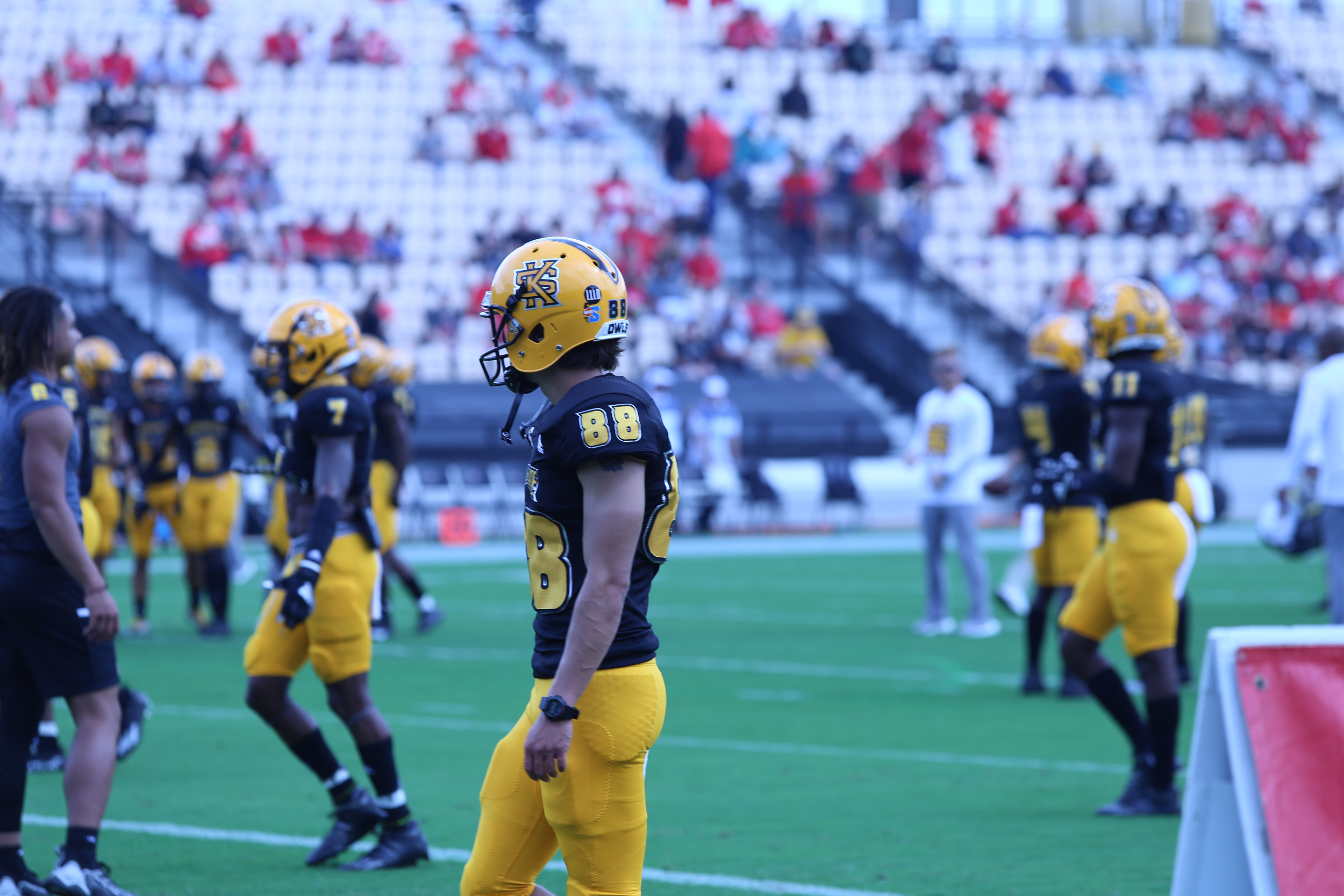 The Kennesaw State Owls added to their win streak by defeating the Hampton Pirates 34-15 at Armstrong Stadium on Saturday, Oct. 9.

Sophomore quarterback Xavier Shepherd was named the Big South Player of the Week last week, and in this game he displayed his dominance by leading the team with 179 rushing yards on 29 carries and three rushing touchdowns. Shepherd also completed 8 of 11 passes for 109 yards giving him a total of 288 yards on the day.

The Owls, despite having a huge lead over the Pirates, committed three fumbles after the stadium received a downpour of rain. The Owls tied their season-high in turnovers, totaling three against the Pirates. The Owls totaled 58 rush attempts, more than five times their pass attempts, making them prone to possible fumbles.

The Owls defense, led by junior Welton Spottsville, who had a team-high seven tackles, held the Pirates to only 151 yards in the air and 125 yards on the ground. The Pirates completed 14-of-22 passes but were only able to convert on 3 of the 10 third-down conversion attempts.

The Owls started the game with a 12 play drive down the field that took them to Hampton’s 21-yard line. The Pirates defense forced a fourth down resulting in a made field goal by kicker, Nathan Robertson. The Owls forced the Pirates into a three-and-out situation resulting in a punt.

The Owls were four plays into the drive when Shepherd ran for 39 yards, but fumbled the ball at Hampton’s 12-yard line. The Pirates were forced to punt the ball away after three plays. The Owls would make it down to the 9-yard line after Shepherd rushed for 41 yards on their third drive, but the Pirates defense forced another fumble. There would be another fumble on the next drive, this time by the Pirates on their first play of the drive.

After the fumble recovery, the Owls used five plays to march down the field and score the game’s first touchdown. Shepherd scored the 3-yard touchdown on 2nd and goal for the Owls and Robertson nailed the extra point.

The next three drives resulted in punts from both teams before Kennesaw would end the scoring drought with a 36-yard rushing touchdown from sophomore Iaan Cousin. The Pirates would end their dry spell with a 41-yard touchdown of their own. They attempted a 2-point conversion to close the gap before the half but the Owls prevented the conversion. With just 1:08 left in the first half, the Owls came down the field and kicked a 32-yard field goal to end the half.

The Pirates received the ball after the half and scored a field goal for their second score of the game. The Owls would score two more touchdowns to end the 3rd quarter and the Pirates scored one more TD to give the game a final score of 34-15.

The Owls finished the day with 448 total yards and converted on 8-of-12 third-down conversions. They also converted 2 of 2 field goals on the day and 4 of 4 on extra points.

The Owls have won four of their last five games, putting them in a three-team tie for first place in the Big South Conference. The Owls have gone on win streaks of three-plus wins in their last four seasons.

The Owls head back home for their Homecoming game against North Carolina A&T on Saturday, Oct. 16 at Fifth Third Bank Stadium.