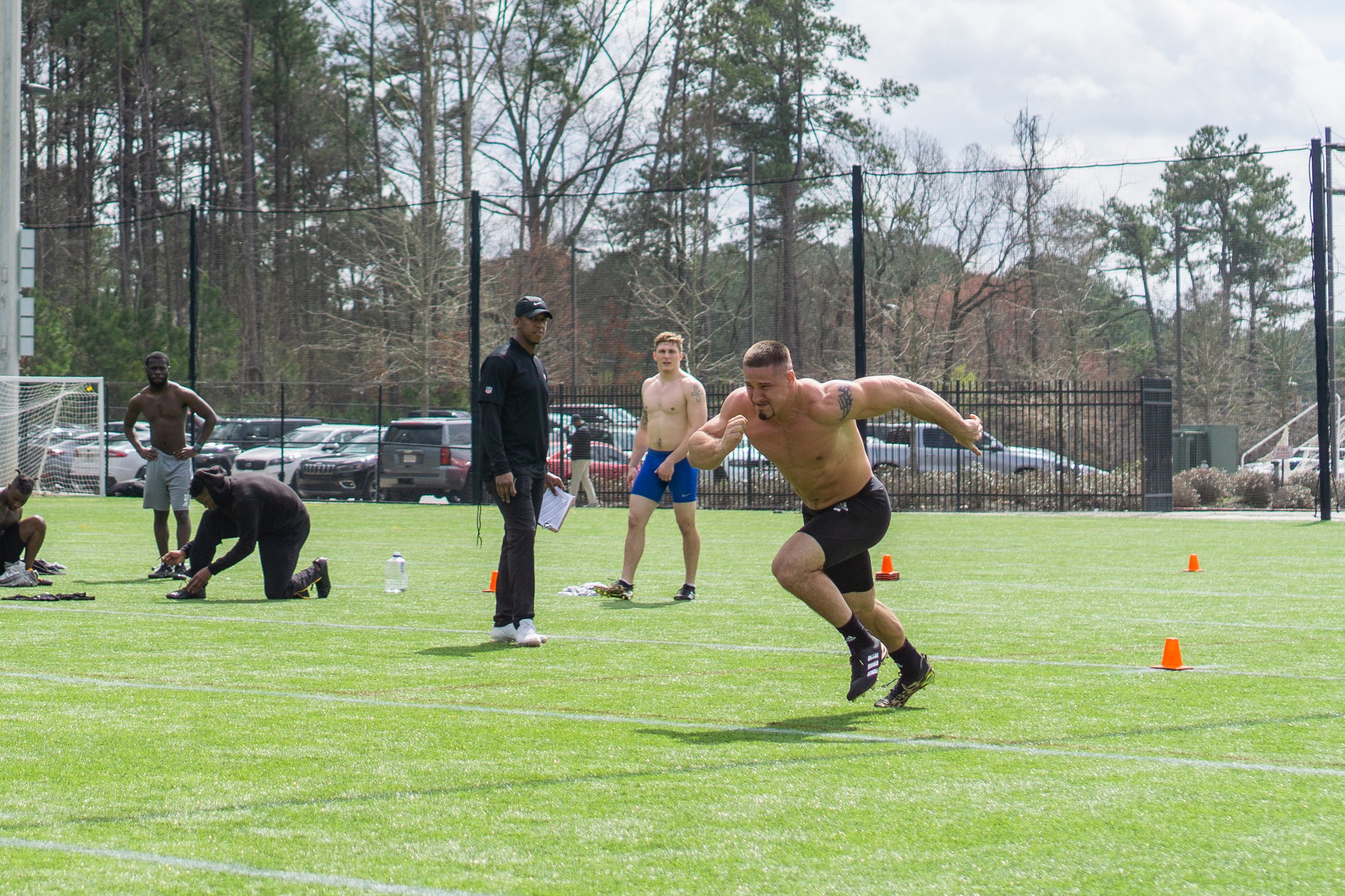 The Kennesaw State football program hosted its annual Pro Day on Wednesday, Feb. 11, where a total of eight former KSU players had the opportunity to work out in front of 27 NFL scouts.

Rechsteiner was determined to show his speed at the event, recording a team-best 4.48-second 40-yard dash. The running back also displayed his agility, leading the Owls with a 6.95-second three-cone drill and a 4.22-second shuttle run.

“I was really focused on speed,” Rechsteiner said. “I’m kind of known for my strength, so it was a change of direction. I wanted to step away from strength.”

The running back still managed to showcase his trademark strength on the bench press, totaling 35 repetitions of 225 pounds. Rechsteiner’s total was higher than that of any running back at the 2020 NFL Combine and would have been third-highest among all athletes at the Combine, according to NFL.com.

Defensive back Dorian Walker also shined for the Owls at Pro Day, recording team-highs with a 35.4-inch vertical leap and a broad jump of 10 feet, four inches. Walker ran a 4.61-second 40-yard dash.

As a junior in 2018, Walker was named to the All-Big South Conference First Team, according to KSU Athletics.

Also in participation for KSU was defensive lineman Desmond Johnson. Johnson led the Owls in 2019 with seven sacks while also adding 41 tackles and a forced fumble.

Johnson, who stands at 6 feet 2 inches, stated that he has worked with coaches and trainers to make the transition from defensive lineman to outside linebacker. The pass-rusher also mentioned holding discussions with multiple teams in the Canadian Football League.

On Wednesday, Johnson said that he received an invitation to the Atlanta Falcons’ local Pro Day in April.

Multiple NFL teams have reached out to Rechsteiner ahead of the Draft. After his Pro Day workout, the running back said he has spoken to the Indianapolis Colts, Dallas Cowboys and Jacksonville Jaguars.

Rechsteiner led the KSU rushing attack as a senior in 2019, racking up 909 yards on the ground and 12 total touchdowns. He had a career performanceagainst Missouri State University on Sept. 21, earning a program record of 229 rushing yards and a touchdown in the win.

“I’m open to whoever wants to take me,” Rechsteiner said. “The NFL is the top tier — I’m honored to just get an opportunity. I don’t care if its fullback, tailback or special teams.”

The running back stated that in preparation for the upcoming NFL Draft, he has mainly worked out in Norcross, Georgia, with veteran NFL trainer Chip Smith. Recently, Rechsteiner has trained with several other prospects from both the FCS and Division I.

Most notably, Rechsteiner has worked alongside former Alabama and Oklahoma quarterback Jalen Hurts. Hurts finished second in the voting for the 2019 Heisman Trophy, according to Heisman.com.

“I’ve worked out with Jalen Hurts quite a bit,” Rechsteiner said. “Everybody knows Jalen’s a stud. It was a cool experience for me to get share the field with those guys. Better competition. Those guys were able to push me.”

Rechsteiner and his seven former teammates hope to become the first-ever KSU players to be drafted in the NFL. As scouts make their final assessments, the Owls will look ahead to the 2020 Draft, which will occur from Thursday, April 23, to Saturday, April 25.