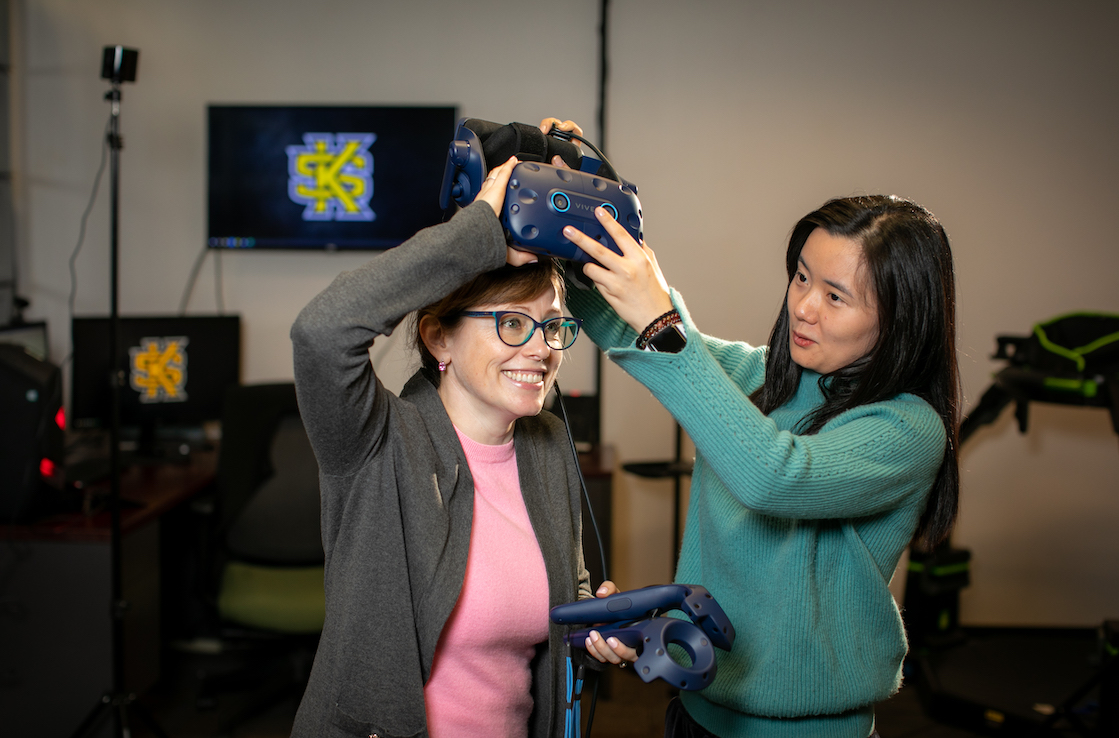 Joy Li helped develop a virtual reality game that allows students to experience what it is like having Parkinson's disease. Photo credit: Photo Courtesy of Jason Getz KSU News

The Department of Software Engineering and Game Development at Kennesaw State has been using Virtual Reality over the past several months to help nursing students experience what it is like having Parkinson’s disease.

Students and faculty of the “Educational and Serious Game Design” course built a gaming simulation that recreates the symptoms a Parkinson’s patient would experience. Senior computer game design and development major Cody Ducleroir said the educational game places players in an everyday environment, such as a home. It asks players to achieve routine goals like turning off an alarm, making breakfast, taking medicine, brushing teeth, showering and more.

Inside of the simulation, the player’s hands shake, mimicking the symptoms of the disease, Ducleroir said. The visuals paired with the in-game tremors make completing these simple tasks more difficult. If a task is not completed in a particular timing window, the tremors might worsen to simulate the frustration and exacerbated symptoms patients experience.

“It basically is using the fact that your eyes overpower the other senses to trick the brain into thinking it has a neurological disorder,” Ducleroir said. “Your eyes control your entire world perception.”

Li said that it was created to operate as a research tool for medical students and to serve as an empathy-building mechanism for users. KSU has collaborated with faculty and students at Augusta to optimize the effectiveness of this VR experience.

Li said that the process of programming the simulation to shake was arduous. VR gaming is designed for stable experiences, and the design team had to reprogram it in a counter-intuitive fashion.

“The nature of the VR is trying to make it as smooth as possible,” Li said. “The challenge is how to go against it and in trying to simulate the real patient’s issues with the tremors.”

The design team believes that gaming technology could benefit the medical field in multiple ways, Li said. Many people think of video games as just a way to relax, but projects like these have shown that this technology can do a lot more than just entertain.

Ducleroir, an avid gamer, was excited to see his hobby being used in a manner that could benefit others.

“Video games aren’t all just fun wastes of time,” Ducleroir said. “Games aren’t just toys for children, it’s actually a way that we can make a physical impact on the world.”

Ducleroir and Li said that showing the project to Wood and her medical students was the most rewarding part of the project. Receiving their positive review scores validated the time and effort involved. The design team believes that building empathy for patients with these conditions via simulation was a vital step towards bettering their quality of life.