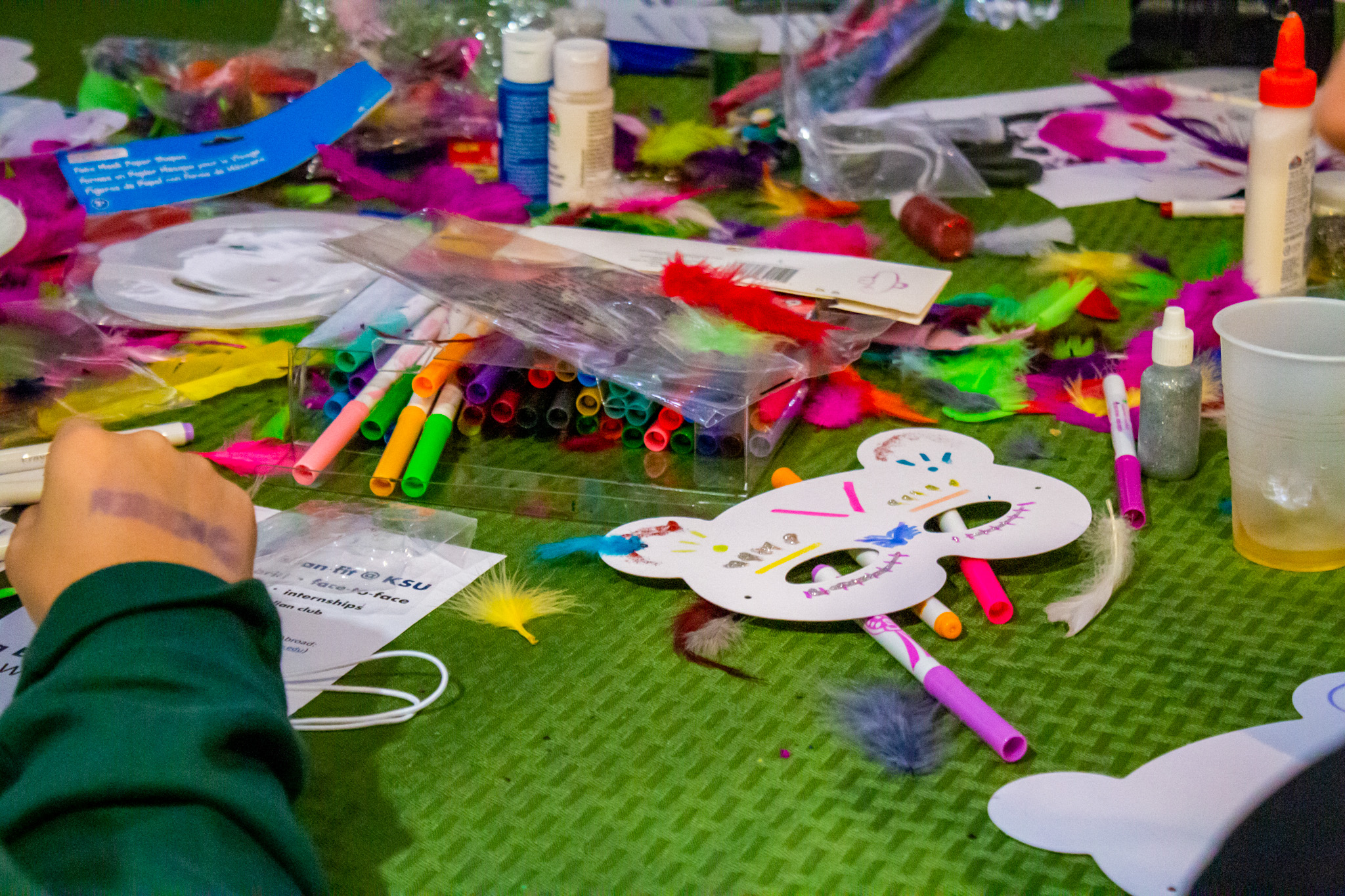 Attendees learned about the global celebration of Carnavale while having the chance to make masks. Photo credit: Rosemary Geller

The Kennesaw State German Club and Italian Club co-hosted an event on Thursday, Feb. 27, in the Social Sciences building to recognize the global celebration of Carnavale and what it means to different cultures.

Carnavale is celebrated around the world, and the event on campus allowed KSU students to experience it with the input of two different cultures.

German and Italian club members compared each of the cultures to the other. Other individuals interested in the activities, atmosphere or food joined the party. Business management majors, history majors, faculty members and others discussed prevalent global topics.

In Germany, the Karneval festivities are to commemorate the fifth season which lasts until Rose Monday — the Monday before Ash Wednesday — and concludes with a parade, according to The German Way’s website.

KSU German Club President Nina Meditz mentioned that she was originally from Germany and said her favorite aspect of Karneval is the atmosphere.

“I love the community,” Meditz said. “You can dress up crazy, and nobody will judge you for it. It brings people together.”

Meditz said that most people only know of Oktoberfest and that it was nice to spread the word about other German holidays as well.

German Club Vice President Alexander Egart considered the event an opportunity for his club to unite in celebration with the Italian club.

“For us here, it’s a way to get together and have the Italian and German cultures connect,” Egart said. “It made sense to come together and celebrate a common holiday.”

The Italian observance is called “The Carnival of Venice,” according to the Walks of Italy website. It is about celebrating social differences and takes place during the days preceding Lent.

Italian Club President Vito Partipelo looked at the event as an opportunity for people of other majors to learn about the culture of Italy.

“It’s a good experience to learn more about Italy, or if they want to know more in general,” Partipelo said. “They might not [learn about it] in classes at school, or anywhere else.”

These festivals served as inspiration for America’s Mardi Gras. Carnavale masks hid the wearer’s social status and costumes honored freedom and individuality, according to the Walks of Italy website.

“Making the masks was my favorite [part],” Sindhu-Alay said. “I just love anything that is related to art. I see that they have so much … material that we could use. That really surprised me.”

Senior modern language major Sidney McKenzie was happy with how many people attended.

“The turnout surprised me,” McKenzie said. “It was fun to make my mask and see other people’s masks, see how their personality plays into how they want to be seen on the outside. It was really cool.”