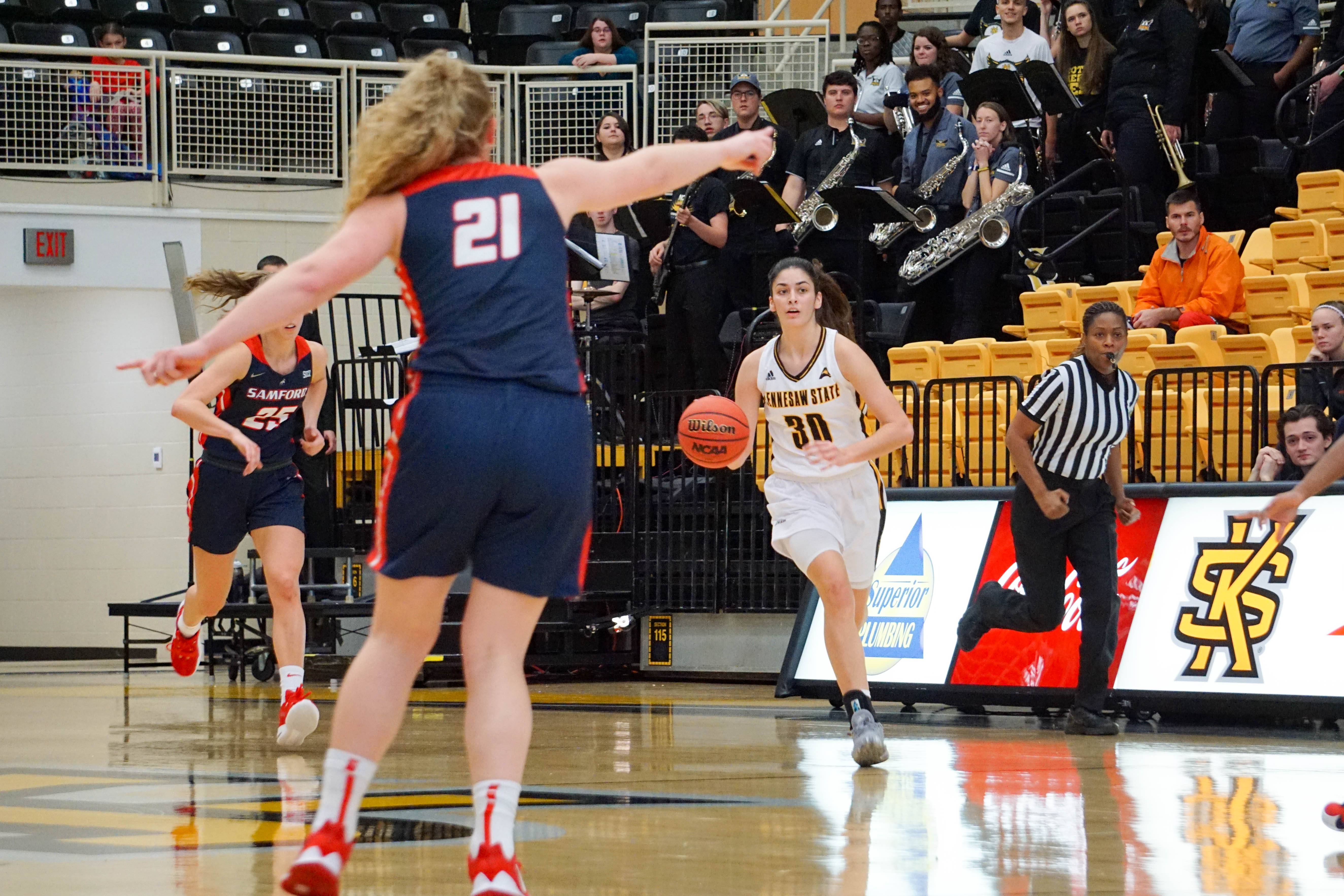 The Kennesaw State women’s basketball team tipped off the regular season with an 80-65 road loss to the University of Georgia on Thursday, Nov. 7, and a 60-55 win over Samford on Saturday.

After falling behind in the first half, the Owls were able to keep up with the heavily-favored Bulldogs behind the strong play of its offense. Senior forward Carlotta Gianolla, junior forward Alexis Poole and junior guard Kamiyah Street led the way for the Owls, combining for 47 points, 10 assists and 10 rebounds.

The Bulldogs established an early lead in the first quarter, scoring eight unanswered points to bring the score to 12-3. The run helped UGA hold a 20-11 advantage entering the second quarter.

Another key playmaker for the Owls was sophomore guard Amani Johnson. She played a team-high 37 minutes and contributed eight points, five assists and three steals.

With three minutes left in the half, Johnson helped the Owls apply pressure on the Bulldogs, assisting Street for a three-point shot that brought the deficit within seven points. Despite the strong KSU effort, UGA ensued on a 12-4 run to lead 46-31 at halftime.

The Owls played much stronger in the second half, matching the Bulldogs with 34 points. KSU started the third quarter on a 10-3 run.

After freshman Gillian Piccolino converted a three-point shot on a fastbreak, Poole grabbed an offensive rebound on the next KSU possession and scored to bring the score to 49-41.

Although the Owls showed increased quality in the second half, UGA prevented a fourth-quarter comeback by KSU and won the game 80-65.

On Saturday, Alexis Poole led the Owls to a victory over Samford through her double-double.

Poole finished the game with 20 points and 11 rebounds — reminiscent of her performances last season when she averaged 14.2 points and 8.4 rebounds per game.

The Owls led Samford for most of the game but were never able to pull away in the low-scoring affair. Samford would find brief success in the second quarter with a scoring run that created the game’s only lead change.

Once again, a small group of KSU players scored the majority of the team’s points, as Poole, Street and Piccolino combined for 44 points.

Leading 25-22 at halftime, the Owls were able to preserve the lead throughout the second half, keeping the Samford offense from mounting a comeback.

“Our defensive pressure was terrific, as was theirs,” head coach Agnus Berenato said. “I thought what we did well was we went inside … Alexis Poole really produced for us today.”