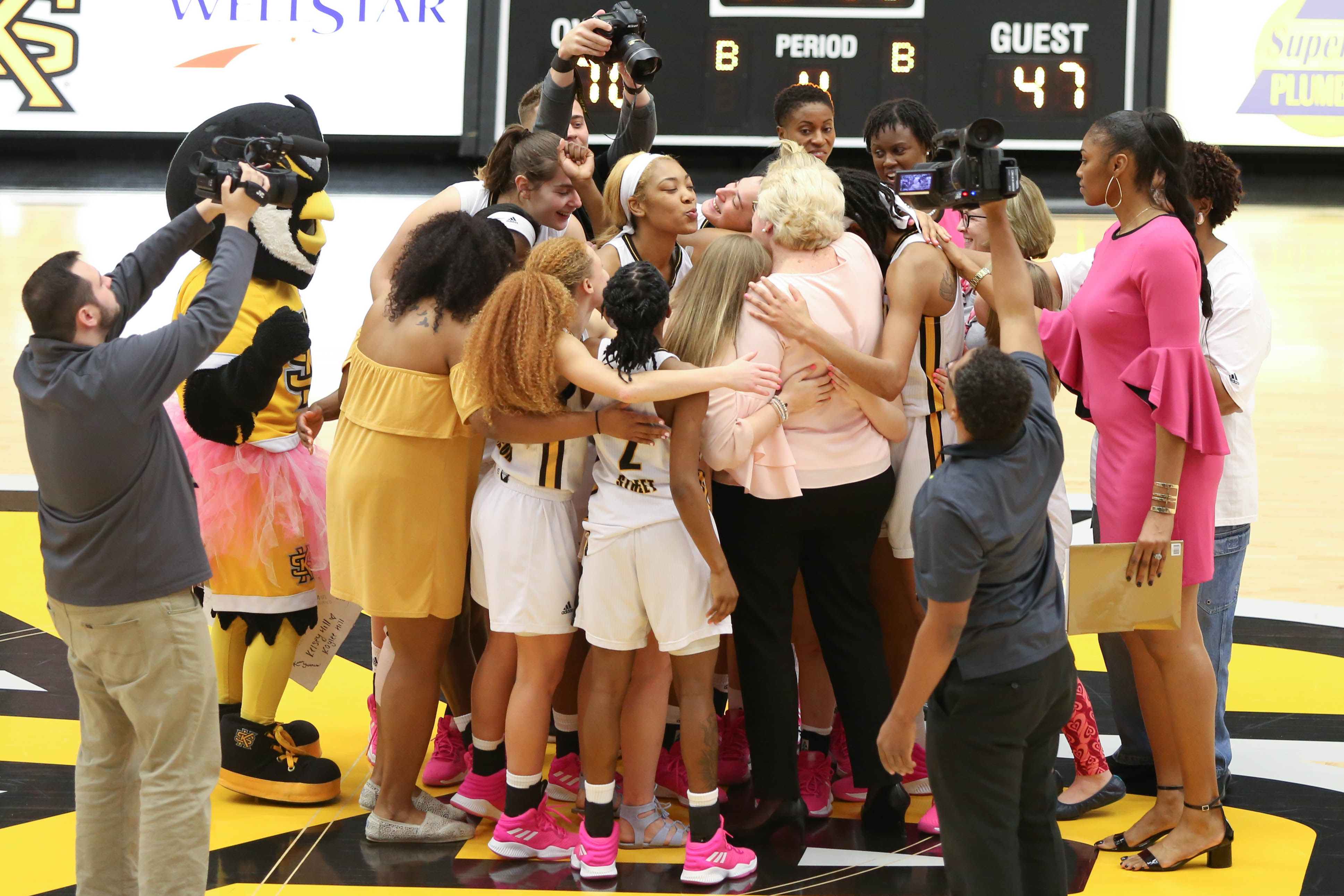 This article has been updated since its original publication.

Kennesaw State head women’s basketball coach Agnus Berenato led her team to a 70-47 victory over the New Jersey Institute of Technology on KSU’s Pink Day Saturday, Feb. 9, before the men won their game 63-62 on a last-second shot.

While Pink Day is an annual event that promotes cancer awareness and education, this year’s edition had a much closer meaning to KSU, as Berenato herself was diagnosed with breast cancer last September.

On a day that meant so much to Berenato, her family, the basketball team and the entire university, she stepped onto the court with the same confidence as any other game, having only missed one game since her diagnosis.

She was recognized before the game for two achievements, including the Carol Eckman Integrity in Coaching award for her history of mentorship and a new endowed scholarship in her name.

Both teams struggled to score for much of the second quarter until sophomore Lexi Mann sparked a run where she scored three quick field goals to lead the Owls 36-20 at halftime.

The third quarter was the only area of concern for KSU, as they only put nine points on the board. Despite this, the defense was able to prevent the Highlanders from gaining much ground to secure a safe lead.

In the final quarter, the Owls increased the intensity of their offense, scoring 25 points to give leave no doubt of a victory.

“A lot of people will look at me and say my only purpose is to win games,” Berenato said. “I feel like my job isn’t just to win games, but to also influence lives and make the people around me better.”

Freshman Ugo Obineke saved the day for the men’s basketball team, making a jump shot with 11 seconds left in the game to beat NJIT 63-62 on Saturday night.

In a game that was close from beginning to end, 17 points from redshirt junior Tyler Hooker and 14 points from junior Bobby Parker led the Owls to their second win in four games.

Both teams scored back and forth in the beginning, setting the tone for the entire game. Parker made two field goals early on while Hooker made early free throws, making seven of nine attempts on the day.

The Highlanders held a small lead for the duration of the first half, but the KSU defense held them to within four points. After a three-minute period without scoring on either side, the Owls started to score again before trailing 30-28 at halftime.

After a layup from Bryson Lockley to level the score, the Owls continued to remain close to the Highlanders, but could not maintain a lead over them. NJIT frequently had answers for each offensive attack KSU tried.

Although Parker only had two three-point shots in the game, he made one at a crucial time as he put the Owls up 59-58 with just over a minute left of play. After the Highlanders made a layup, they missed the ensuing free throw, leading to a fadeaway shot from Kosta Jankovic with 37 seconds remaining.

Out of the timeout, the Highlanders earned a trip to the free throw line following a foul from Obineke. After NJIT made both free throws, Obineke made up for the error, working his way around the paint for a catch-and-shoot jumper to give KSU their final lead.

The Highlanders attempted a last-second shot of their own, but the missed layup fell into the hands of Obineke.

“The most important thing was that I think we really maintained our composure,” head coach Al Skinner said. “We are growing and we are trying to get guys to understand that in order for us to be successful, we have to bring what we do in practice to the game.”