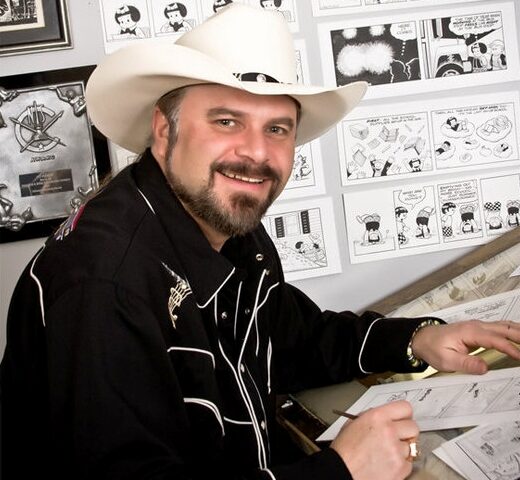 The Muppets have returned to television with their new show “The Muppets” on ABC, airing Tuesday nights at 8 p.m. The Muppets have been a major part of popular culture since their creation by cartoonist Jim Henson in 1955. The eclectic group of “marionette” and “puppet” friends started out as a variety show called “Sam and Friends” which aired locally in Washington, D.C. until they started appearing on Sesame Street in 1969. The Muppets later started appearing in their own films and TV Series (“The Muppet Show,” The Muppets Take Manhattan) and appeared in their own comic strip in the 1980’s.

Henson was looking for a talented cartoonist to bring The Muppets to a daily newspaper comic strip when he and his company were about to lose the rights but was having trouble finding the right one. When Mort Walker, the creator of “Beetle Bailey” recommended Guy Gilchrist. He was called in and after many auditions and Gilchrist was given the job. At the time, he was only 24 years old. Gilchrist along with his brother, Brad, wrote and illustrated the comic from 1981-1986, which was printed in over 660 newspapers worldwide.

Along with The Muppets, Gilchrist’s talent has been loaned to “The Looney Tunes,” “Tom & Jerry,” “Fraggle Rock,” “The Pink Panther” and is the co-creator of “The Muppet Babies.” Gilchrist also writes children’s books and has been drawing for the comic, “Nancy,” which centers around an orphan girl and her friends and family adventures since 1995.

Gilchrist was kind enough to take time out of his schedule to allow an interview with The Sentinel. In the interview he talked candidly about what started his interest in cartoons. “When I was a little boy, I really had two loves. I loved rock n roll and I loved to draw. So I used to write stories about the guitar and write songs, make up stories and comic books,” Gilchrist said. His mother was truly the one who is to thank for his skill. When he was a child, his family did not have much and Gilchrist’s mother would take him to the diner where she worked and would make him draw characters from the comics in the newspaper. After discovering that he had a talent, at the age of nine, he started drawing and selling his sketches of favorite characters like Tom & Jerry, Woody Woodpecker, Popeye charging a nickel for each to kids at school. Gilchrist also would sell sketches of Batman, but those were a dime each.

Gilchrist also talked about how excited he is for the new show, “The Muppets” to be on TV again. “I think it’s great! … I love the fact that the Muppets are gaining a new audience of college kids, high school kids, and young children,” he said. The longevity of the characters from just a vaudeville show and comic strip to pop culture icons has impressed Gilchrist while evoking excitement that new generations of viewers are enjoying the eccentric characters. He believes the success of the characters is due to their antics and their genuine love for each other. “The Muppets have always been outsiders, that’s why we love them,” Gilchrist said. Towards the end of the conversation, Gilchrist gave advice to aspiring cartoonist saying to never stop drawing because people will always put you down, so you have to believe in yourself. As for Kermit’s new girl, Gilchrist said with a chuckle, “it’s not going to last.”

The Sentinel at KSU would like to thank Mr. Gilchrist for allowing an interview and catch “The Muppets” on ABC at 8 p.m. and read “Nancy” at www.nancyandsluggo.com.

Students can improve focus through yoga

Jan 21st, 20225
A new semester is upon Kennesaw State students, so ways to sustain focus and combat distraction, such as...
Arts & Living