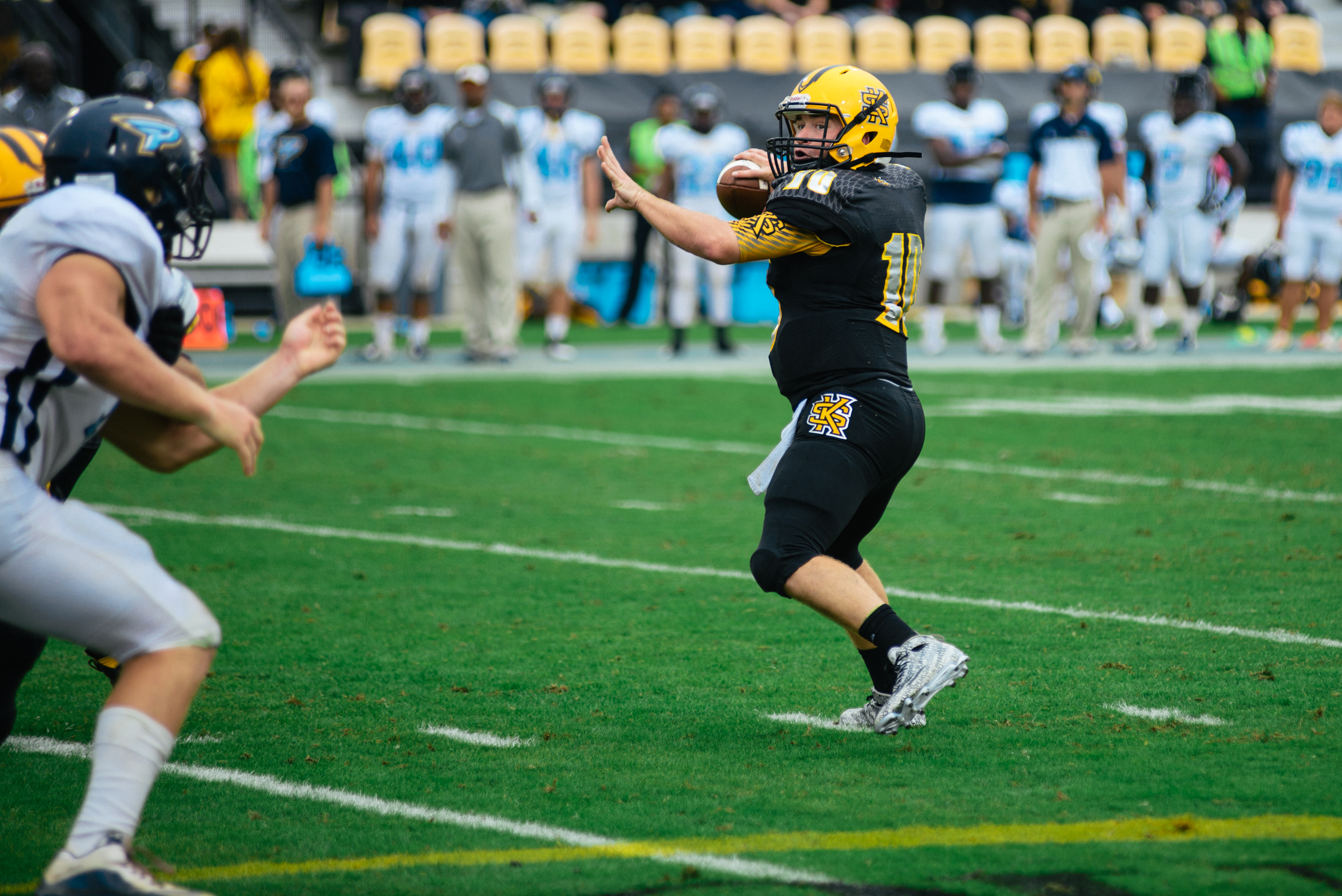 Kennesaw State amassed 699 yards of total offense and claimed a 56-17 win over Point University in the first homecoming game in school history.

Chaston Bennett had a career day with three total touchdowns as he accounted for 160 yards of KSU’s offense, 70 rushing and 90 receiving.

The offense rarely slowed down as quarterback Trey White piloted the Owls, completing nine passes for 239 yards with three touchdowns and rushing for 55 yards.

KSU (4-1) got to work quickly, forcing Point to punt on the game’s opening drive and then assembling an eight-play, 84-yard drive to take a 7-0 lead when Darnell Holland took a 43-yard touchdown pass to the house six minutes into the game.

The Skyhawks kept things close early, but the Owls broke the game wide open in the second quarter where they scored on all four of their drives.

White followed up his first touchdown pass with two more, a 69-yard toss to Bennett and a 19-yard throw to Justin Sumpter on consecutive drives, which made it 21-0. The typically run-heavy KSU offense totaled 304 yards after Sumpter’s catch, 199 passing and 105 rushing.

KSU scored its first rushing touchdown of the day on a 49-yard dash from Jae Bowen to make it a 28-0 game.

On the ensuing possession, Point answered with an 86-yard touchdown pass from Charles Fortis to Connor Reed on the first play of the drive.

Each team added another score before the half, KSU a 14-yard TD run from Bennett and Point a 43-yard field goal which struck the crossbar, went straight in the air and narrowly fell on the opposite side to set the halftime score at 35-10.

Bennett ran for his third touchdown of the day in the third quarter which made it a 42-10 game and ended most of the starters’ day.

Jake McKenzie replaced White at quarterback and ran for a 14-yard touchdown late in the third quarter. Backup running back CheDarious Robinson also scored a late touchdown, a 3-yard run which was the Owls’ final score of the day.

The Owls finished with 308 passing yards, 239 coming from White, his career high. The three touchdown passes from White was also the most KSU has had in a single game all season.

“Every game you want to build,” White said. “That’s been our attitude all season. Each game you have to get better, and that relates to the passing game as well. Anytime you can be successful in the passing game, especially in a game, it definitely helps your confidence.”

KSU hosts Gardner-Webb Saturday, Oct. 17 at Fifth Third Bank Stadium at 1 p.m. for the Owls’ first Big South Conference game. The Runnin’ Bulldogs are coming off of a big win over No. 15 Liberty.