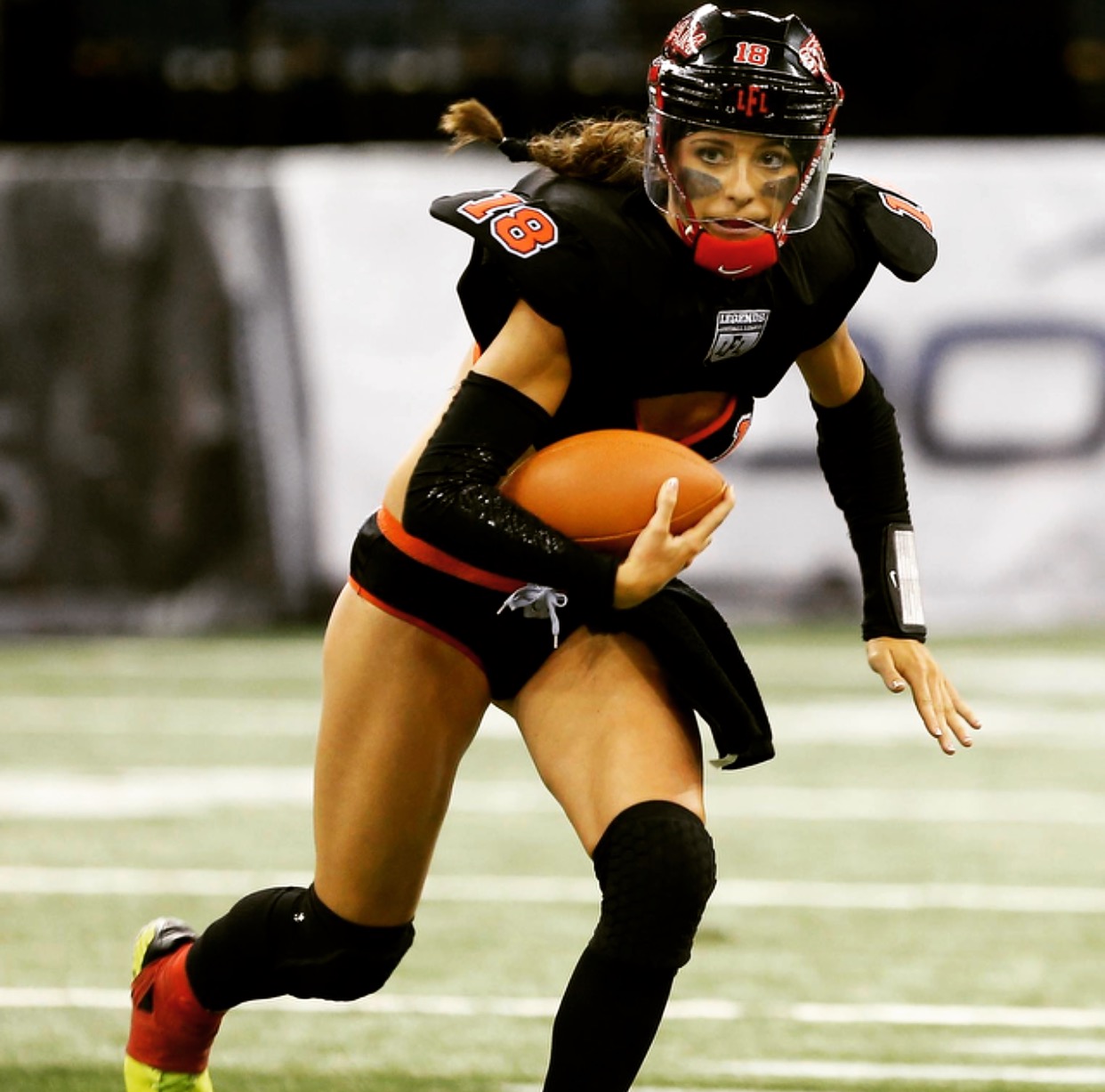 Dakota Hughes, a 20-year old communications major, is the starting quarterback for the Atlanta Steam of the Legends Football League (formerly the Lingerie Football League).

What was once a gimmick to make money during halftime of the Super Bowl, the LFL has now evolved into a nationwide league offering the highest level of women’s football, and Hughes is at the center of it.

“Growing up I pretty much played every sport possible, but one of those that I couldn’t play was football,” Hughes said. “That’s something, as a competitor, it made me upset that boys could do something and I wasn’t allowed to do it.”

The closest Hughes could get to her dream of playing on the gridiron was flag football in high school, and eventually intramural flag football at KSU. That was until one of her KSU teammates, Krista Cross, introduced a then-18-year old Hughes to the idea of playing in the LFL.

With no knowledge of the Steam or the LFL, Hughes balked at the idea of pursing the sport.

“It was a big thing for me because not knowing anything and looking in and seeing the uniforms I automatically said ‘I could never run around in a bikini and play football,’” Hughes said. “I was worried my family would say something.”

After extensive talks with her family, and consistent persuasion from Cross, Hughes opted to attend tryouts for the Atlanta Steam. The rest is history.

In her first season with the Steam, Hughes assumed the starting quarterback role and led the team to an appearance in the Legends Cup, the championship game of the league. She was also named the Rookie of the Year in 2014.

“Most girls in this league played 11 on 11 or played some type of tackle and I just jumped right into it,” Hughes said. “I never had that experience. I really only knew how to throw.”

Having gone from flag football to full-contact football in a matter of months, there was a steep learning curve for Hughes, namely learning how to call plays in a huddle and how to think like a quarterback.

Steam head coach Dane Robinson, though, was prepared to start Hughes from day one when she stepped onto the practice field prior to the 2014 season.

“From a maturity standpoint, she was 18 years old at the time, you could have fooled me that she was that young,” Robinson said. “Seeing the hard work that she was putting in during practice, there was a lot of hype behind her. There was this slow, steady build of what Dakota was going to bring to the LFL. We had all of the confidence in the world—good, bad or ugly—we had something very special in a quarterback.”

During her short time in the LFL, Hughes led the Steam to a Legends Cup final and back-to-back east conference championship games, claimed Rookie of the Year and Offensive Player of the Year honors, and became the face of a franchise.

The Steam took a step back in the 2015 season, but Hughes did not. She followed up her Rookie of the Year performance by earning the Offensive Player of the Year, despite the team going .500 and missing out on the Legends Cup Final.

While the sport is as real as it gets for players like Hughes, fans continue to hastily hold reservations about the legitimacy of the league.

“A lot of people, their first time, they come and they just want the uniforms,” Hughes said. “They want to watch girls run around in bikinis. Then when they see that we actually play football, they say after the game, ‘Oh my God I had no clue it was like this, not going to lie we came for the uniforms. Then we realized that you guys actually play football, ya’ll are real athletes.’”

When the LFL began as the Lingerie version in 2004, it was a one-game pay-per-view event held during the halftime of the Super Bowl. After three years, the single-game event expanded into a ten-team league.

The LFL rebranded to Legends Football League, changed the uniforms to a sportier version and improved the overall image by providing safer equipment for the players and changing the league slogan from “True Fantasy Football” to “Women of the Gridiron.”

There are now six teams in the LFL, but a handful of expansion teams are in planning. A reality show titled “Pretty. Strong.” premieres on Oxygen Tuesday, Oct. 6 which chronicles LFL team the Chicago Bliss.

“To be able to say that I am a woman playing football and I’m helping set the tone for, hopefully, future women in football and sports in general, I really want to be that pioneer,” Hughes said of her time in the LFL. “It means a lot to me to see that women and little girls are getting the opportunity to play football. Just a few years ago, I wasn’t able to do that.”

Hughes, Robinson and the rest of the Steam are preparing for a run at a Legends Cup victory in 2016 when the season begins in April. Robinson also named one of his goals as seeing his star quarterback practice with the KSU football team.

“That’s a barrier we would like her to break at some point,” Robinson said. “It’s one thing seeing the speed of the LFL, it’s a completely different monster when you’re going against men. But that’s where you want to challenge yourself to be the best. I’d love to see Dakota practice side by side with the KSU quarterback. I think that would be a big barrier to break for her.”

Hughes plans to graduate from KSU with a communications degree with a focus in broadcast media and journalism. Her goal is to become a sideline reporter, something she believes she has the upper hand in with her experience playing women’s football at its highest level.