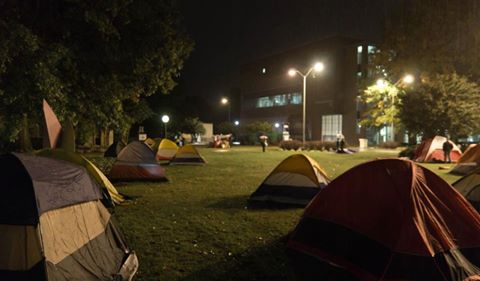  Homelessness is such an abstract thing to consider, but when broken down into its components, no college student is too far from living in shelters or on the streets.
The thin tether tying us to society is the bond between us and our families and friends. Without these social ties and systems of support, any 23-year-old college student could find that the cost of living and the lack of decently paying jobs means he or she must choose between paying rent or buying food. The steps to get from a friend’s sofa to living on the streets seem dramatically fewer than we students may have thought.
When you look around cities like Atlanta and even parts of Marietta, those in the street are often assumed to have just given up: drug and alcohol addicted people who chose to make their way in life. And in some cases, this is true. But, according to Kaye Cagle, a spokesperson for MUST Ministries, the problem isn’t “homelessness,” the problem to combat is poverty.

Putting poverty into perspective seems more a matter of accepting reality for college students. Some students have scholarships, some have parents paying tuition and housing bills and many students on KSU’s campus are piling on debt through private and federal loans. These loan-supported students worry me the most, and I’m one of them.

The New York Times author Natalie Kitroeff published an article, “Young and in Debt in New York City: Student Loans Make it Hard to Rent or Buy a Home,” June 6 that said while investing in college education is working for students, “A record number of college students are graduating knee deep in a financial hole before they begin their adult lives.”
A bachelor’s degree is the modern equivalent of a high school diploma for our parent’s generation, but in the last 10 years alone, education debt tripled, reaching over $1 trillion, Kitroeff said.

Poverty and homelessness suddenly make sense after doing the math. The fair market value of a two-bedroom housing unit in Cobb County is $896, according to the Department of Housing and Urban Development. That doesn’t include utilities. That doesn’t include gas or food. In looking at the $1,160 gross income—before taxes—from minimum wage for a full-time employee, the money doesn’t seem enough to pay rent let alone anything else like transportation to and from work or to take care of a child.

The national minimum wage was created by Congress under the Fair Labor Standards Act (FLSA) in 1938, to stabilize the post-depression economy and protect the workers in the labor University Law School website at www.law.cornell.edu/wex/ minimum_wage.

“The minimum wage was designed to create a minimum standard of living to protect the health and well-being of employees,” Cornell Law’s website said, and it is the barebones bottom that an employer can invest in training new talent, so society generally associates minimum wage with the 16-year-old high school student working at a fast food restaurant, seeking to save up for a concert ticket or gas for dad’s car. Imagine you’re a college student: a two-bedroom, one- bathroom apartment for $450 a month plus utilities isn’t so bad to share with another person, while in school. Now, imagine you have to support yourself without a solid support system and your car needs a new transmission to get you to work and class. The emergency $1200 goes on your credit card when a call to mom won’t cut it. If you don’t have a credit card, you don’t have a car anymore.

The vicious cycle appears like a tornado dropping out of the sky when you start thinking about what would happen if you had a baby at 23, and dropped out of school to raise the baby—on a job that paid maybe a dollar or two above minimum wage. A single student working 17 to 20 hours a week at a minimum wage job (more like $8 or $9 an hour) could swing rent with a housemate at fair market value. Working students might even have enough left over to buy a cup of coffee for finals week.

But the odds certainly seem stacked against college students who work, take full-time courses and try to enjoy life. Forget about it if the student has other real- world responsibilities like an ill parent or a baby.

Poverty is the problem and raising the minimum wage is one way to try to fix it. A better way is education. Teach your children and educate yourself while in college.

What do you think? Reply below.

Sep 8th, 202086
A lack of available information and education often leads to many people in the United States thinking of...
Opinion

Sep 8th, 202068
College students have experienced an escalated amount of loneliness, stress, anxiety, and depression during...