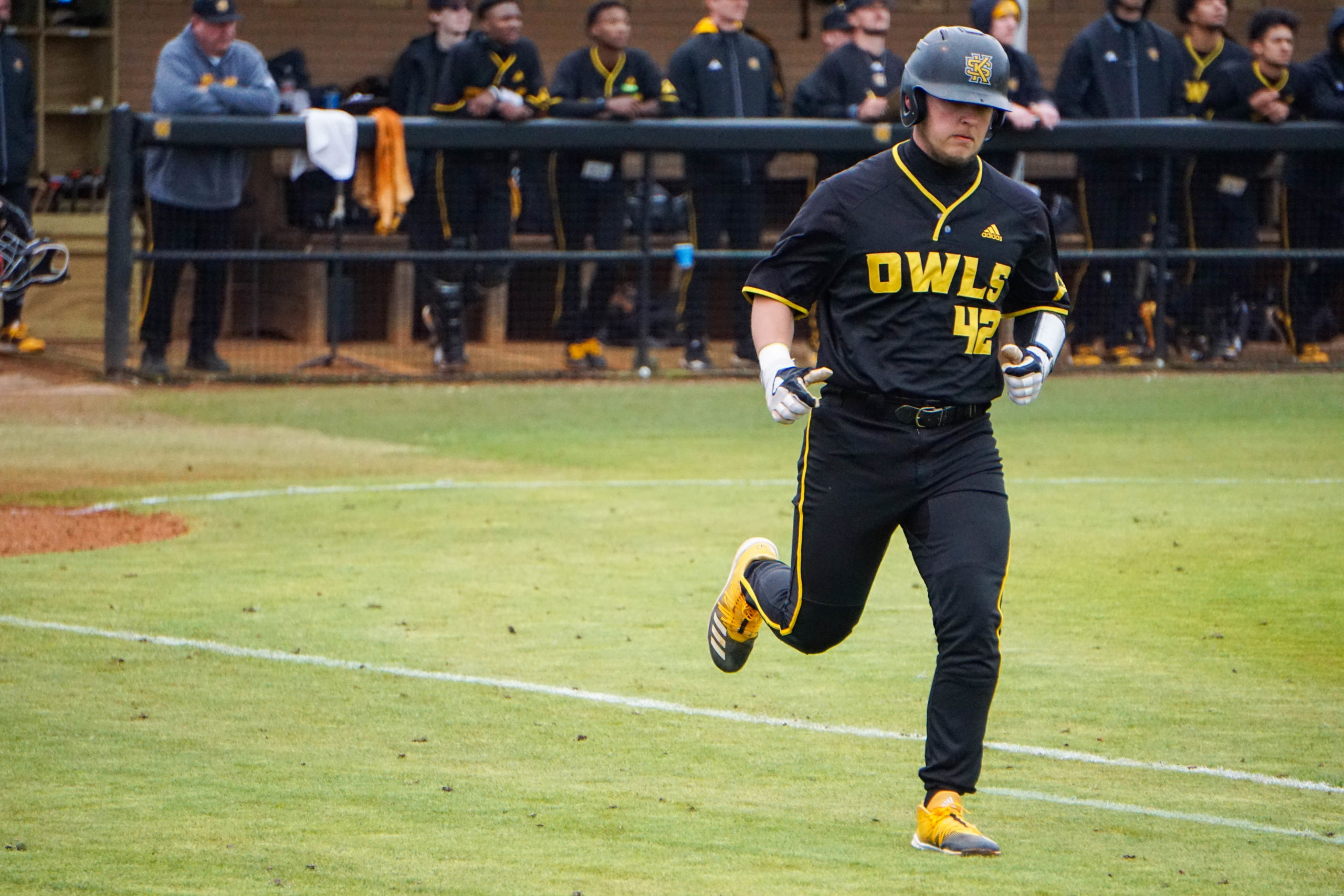 The Kennesaw State baseball team began its season with a 3-0 record after winning home games against St. John’s University, Saint Peter’s University and the University of Cincinnati from Friday, Feb. 14 to Sunday, Feb. 16. The Owls were successful offensively, totaling 36 runs in three games.

“I thought our pitching did a very good job of managing the game,” KSU head coach Mike Sansing said after the win. “And you can include our defense [also], that was a bright spot for me.”

Both teams went scoreless in the first two innings, but the KSU offense began to pick up in the third. Junior infielder Tyler Simon and sophomore catcher Tyler Tolve each hit RBI singles in the third inning, which put the Owls on the board with a 2-0 lead.

“[Carballo] is a tough out,” Sansing said. “He’s got a very good knowledge of the strike zone.”

In the seventh inning, Atlantic Sun Preseason All-Conference infielder Justin Russell added his first of two RBI with a single to right field. Later in the inning, Carballo and sophomore outfielder Nick Colina were both walked with loaded bases to stretch the lead to 8-1. In the eighth inning, Russell and Tolve both reached home once again.

Russell finished the game batting 3 for 4 with two RBI and three runs. Carballo went 2 for 2 and led the team with four RBI.

For the team’s second game of season, the Owls defeated the Saint Peter’s University Peacocks by a score of 15-7 on Saturday. Junior pitcher Monty Horn earned the victory after replacing the team’s starter during the second inning.

SPU took a two-run lead in the first inning but soon fell behind as the Owls earned four runs in the second inning through Carballo and Tolve. The third inning saw SPU tie the game 4-4 before redshirt freshman outfielder Logan Fink hit his first career RBI to give KSU a one-run lead.

KSU gained control of the game in the fifth inning, knocking five runs home and increasing its lead to 10-4. Fink and Tolve added their second RBI of the game, and ASUN Preseason Player of the Year Terence Norman earned two runs of his own with a single to left.

After the Peacocks brought the score to 10-7 in the sixth inning, KSU would close the game by scoring five runs in the eighth. Tolve, Russell and senior designated hitter Garrett Hodges earned RBIs in the team’s final plate appearances.

Tolve made a difference against SPU, hitting 3 for 4 on the day with four RBI. With the win, KSU moved to 2-0 for the second consecutive year.

For the final game of its opening weekend slate, KSU hosted the Cincinnati Bearcats on Sunday. The Owls secured an 11-7 win behind a strong performance from freshman catcher Nick Hassan. In the first start of his collegiate career, Hassan went 4 for 5 with five RBI and a double.

KSU was held scoreless until the fourth inning, during which the Owls took a 3-2 lead with RBIs from Hassan and Carballo.

The score would stand at 3-2 until the sixth inning, as Cincinnati answered with a three-run home run to take a 5-3 lead. KSU regained its lead in the same inning, as five different players knocked an RBI to seize an 8-5 lead.

Hassan clinched the victory for his team with a three-run double in the eighth inning. The Bearcats put up two runs in the ninth, but fell short in the end.

After the weekend sweep, the Owls now stand at 3-0 for the first time since the 2013 season. Next up, KSU will host the Georgia Bulldogs on Wednesday, Feb. 19, at 6 p.m.