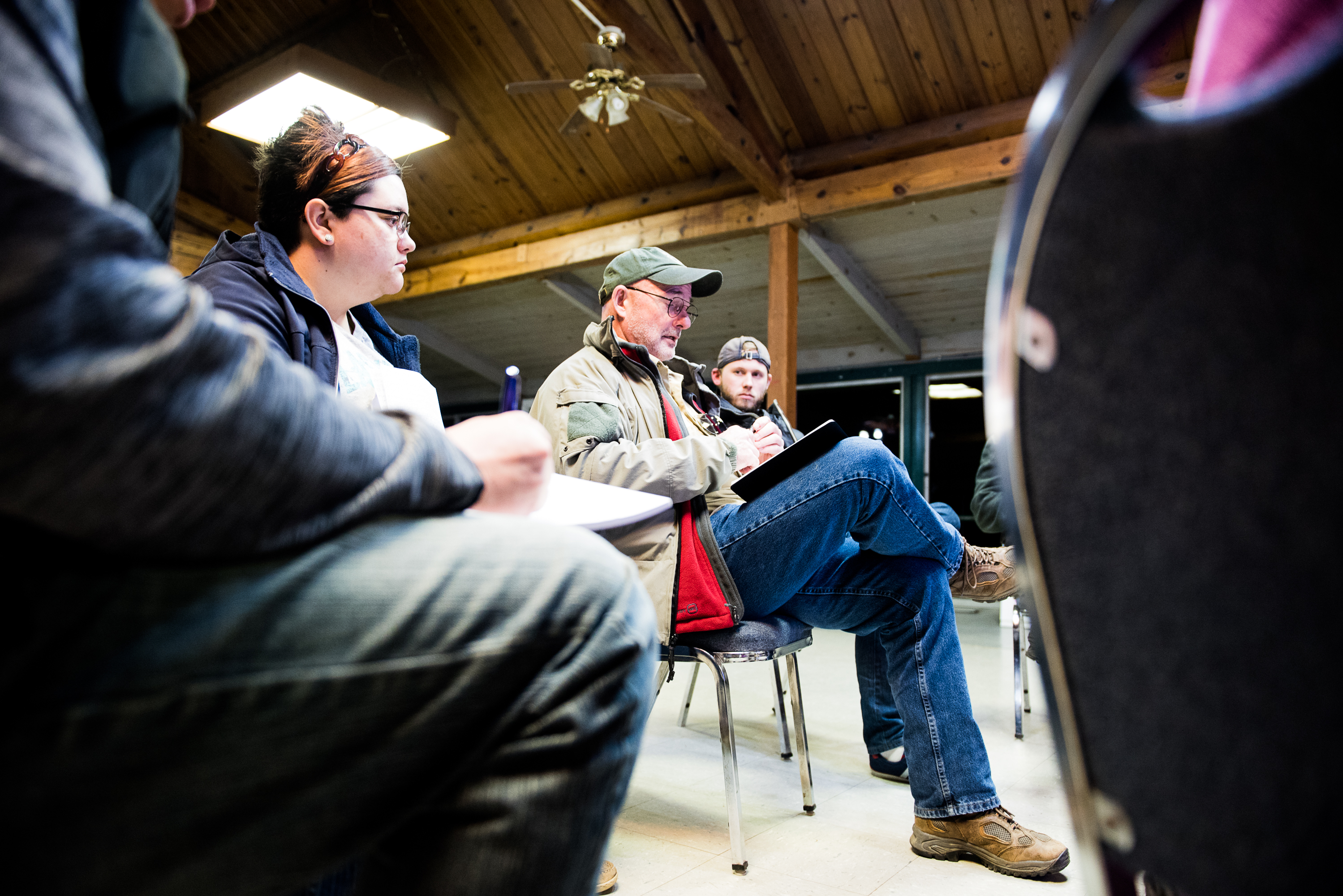 A flurry of students mingled in circles based on political allegiances, identities and objectives, proposing ideas of how to best address the latest sub-scenario presented to them.

A group of five, portraying refugees, express outrage at being separated from the other students that are portraying townspeople at dinner time. Not to mention, they are only given one bag of Lay’s Original Potato Chips.

The School of Conflict Management, Peacebuilding and Development, in conjunction with Trends Global, put on a simulation for students and alumni from March 9-10.

Jessica Hill, portraying the Social Democratic Party mayoral candidate, speaks to other participants during the simulation on March 10.

“This simulation replaced one that Dr. [Sherrill] Hayes has taken students to for the past five years,” Franke said in an email. “We decided to try an in-house simulation to look for a more cost-effective way to engage a larger number of graduate students and alumni.”

“The intention in all of this is to help students both, one, learn information and, two, practice skills they will need in their professional lives,” said Dr. Sherrill Hayes, a professor of conflict management. “In the case of the Refugee Crisis in Europe simulation, it was important for students to understand the content of what is happening in Europe with migration and refugees since migration is one of the front and center issues in international conflict and peacebuilding.”

It was placed in the context of the fictional town of Waldbach, Germany, in the state of Saxony. Participants were given roles as a principal at the town’s school, mayoral candidates for competing parties, the local factory owner and refugees, among other roles — in total, 14 people participated.

The purpose of the simulation is “to develop an understanding of the complexities of global migration and, more specifically, the current refugee crisis in Europe.”

A series of sub-scenarios challenged the participants to strategically work together to achieve goals that were outlined in the descriptions of each “character.” Some scenarios included: finding a resolution to educating Syrian refugee children, a proposal to build a mosque, violence against the refugees and a food shortage in the refugee camp.

The “townspeople” and “refugees” were physically separated in different buildings at the Cherokee Outdoor YMCA, where the simulation was held, to add to the realistic element of separation.

“We [instructors] felt the exercise brought some realism to the classroom,” Franke said. “[A] participant commented that he got so much into his role that he could identify with and advocate political positions far from his, now, in real life.”

One participant, playing a refugee, described how bored and isolated they felt. As the simulation progressed, they realized that refugees in camps across Europe probably feel the exact same way.

“Learning by doing and having the ability to apply theory to practice makes classroom material tangible, fun and meaningful for students and connects them intellectually as well as emotionally to their learning,” Franke said.

In the interest of full disclosure, The Sentinel’s Editor-in-Chief Cory Hancock played the role of the journalist during the simulation.