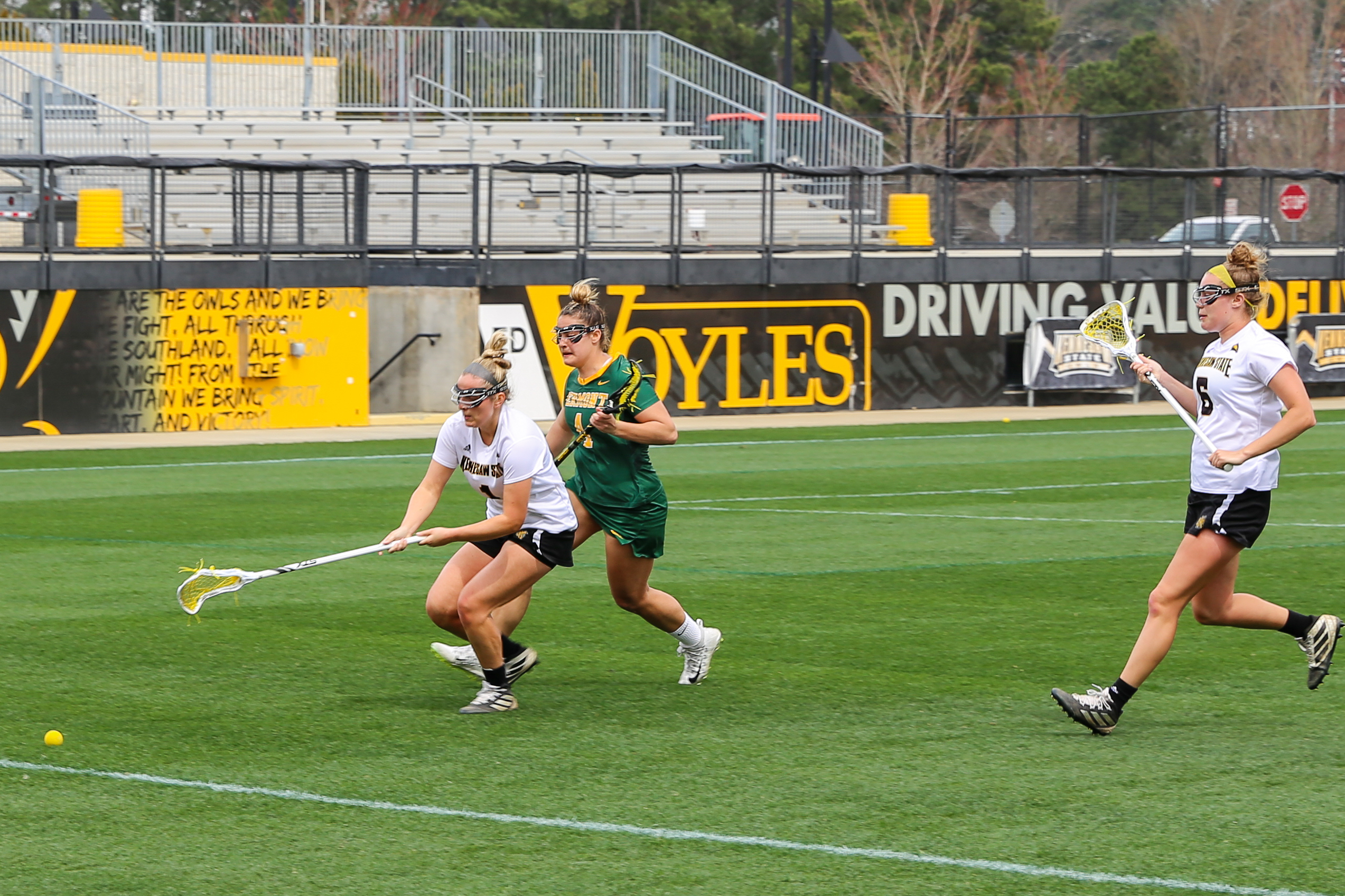 The Owls got off to a slow start, quickly falling behind 3-0 in the game’s first few minutes. Vermont found a soft spot in the KSU defense, and was able to take charge with a quick attack that resulted in several early shots on goal.

KSU controlled the time of possession in the first half, but the offense was unable to capitalize on its scoring chances and committed 13 turnovers.

“It’s been a problem going through scoring droughts, and that has carried over to today,” head coach Laura Maness said after the game. “That’s why the first half was slow, and it’s something we need to fix from the very beginning of the game.”

The Owls finally got on the board when junior midfielder Siena Gore scored her 25th goal of the season on a free-position shot.

For the rest of the half, the Owls and Catamounts traded goals. Sophomore midfielder Jaxsyn Schonewille, junior midfielder Marissa Gore and Siena Gore all found the back of the net, but the team went into halftime trailing 8-5.

The second half looked to be more competitive, as KSU found its rhythm and was able to tie the game at 10-10 with 20 minutes remaining in the half. Siena Gore scored her second and third goals, adding another hat trick to a prolific scoring season.

With the game tied up, both teams took a more aggressive approach. Both teams played with physicality and neither offense would back down as the game came to a close.

“[Vermont was] a really good team,” Maness said. “They definitely out-sized us [and] we really had to earn every possession.”

Both teams continued to trade goals back-and-forth before Vermont ultimately pulled away, closing the game with a three-point victory. Both the Owls and Catamounts scored nine goals in the second half.

Vermont had the edge over KSU in nearly every statistical category, with an advantage in shots on goal, ground ball control and turnovers. KSU, however, fared well on draw controls and took advantage of free position shots, going six for seven on the day.

“One of the biggest things we need to focus on is not having empty possessions,” Maness said. “Those include offensive turnovers and bobbling the ball before we get an opportunity to shoot under pressure. We had a few of those, and they led to our scoring droughts.”

The Owls looked to bounce back as they were set to make their first road trip of the season to begin Atlantic Sun Conference play on Friday, March 13. However, due to recent decisions by the ASUN to cancel the rest of the 2020 season, the Owls finished with an overall record of 3-4.