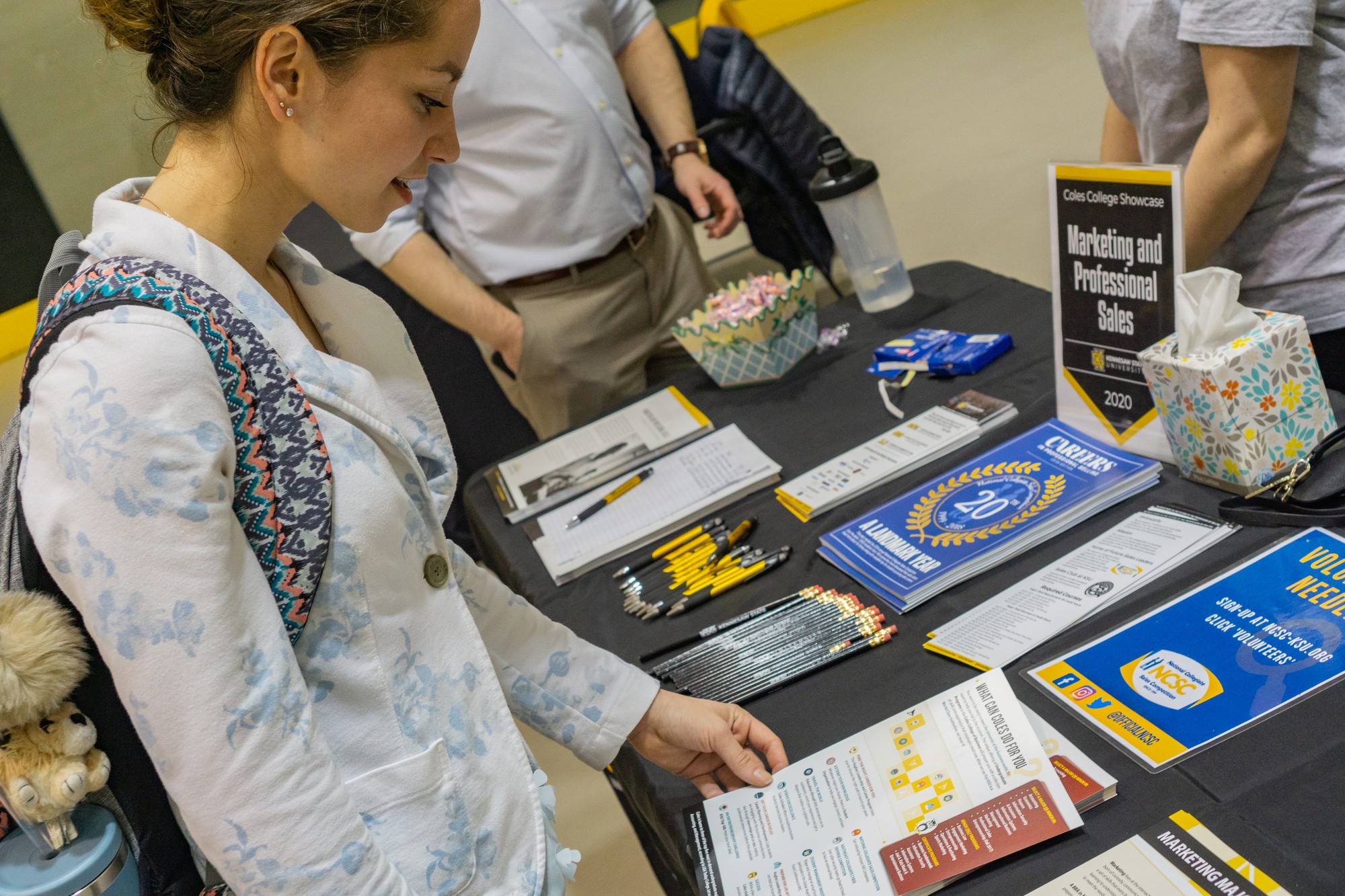 At the Coles College Showcase, students had the opportunity to learn about resources currently available to them on campus. Photo credit: Carsyn Taylor

The Kennesaw State Coles College of Business held its first Coles College Showcase on Tuesday, March 10, to demonstrate what groups and departments were on campus to help students in college.

The showcase took place in the Dr. Betty L. Siegel Student Recreation and Activities Center on the Kennesaw campus and featured 21 stations for students to gather information.

Organizations such as the KSU Student Managed Investment Fund and campus resources such as the Library were present to talk with students about what extracurricular activities they can do at KSU. There were various booths representing schools within the Coles College.

An extra booth headed by Student Success Manager Jasmine Jackson allowed students to finish their time at the showcase and pick up free snacks.

The showcase allowed students to gather the information that may not have been known to them, such as a full report on the KSU SMIF’s previous financial results and a booth about the lesser-known Enactus.

Senior management major Valese Wilkerson said the event was helpful in highlighting areas a student may not know they should focus on.

“You can join clubs or programs they have, and it was informative for people who don’t know about different stuff — they can learn and meet people,” Wilkerson said.

The showcase exposed students to resources that are available on campus for their benefit, University Information Technology Services communications manager Jaime Fulsang said.

“There’s a lot more opportunities through the business school than I thought there was,” junior management major Wynter Olson said. “There were things here I [did not] know were available.”

Upon entry, students were given a showcase passport to use at the booths and tickets for a drawing as part of the event.

Through the use of the passport, students could receive Career Exploration credit by collecting 10 different stamps in their passports at booths. Attendees could also receive Effective Communication credit by filling out a space on the back of their passport for their biggest takeaway from the event and posting on social media with #colescollegeshowcase on Facebook, Twitter or by posting it to their LinkedIn.

Both types of credit were done through the Coles College Flight Academy, Jackson said.

The showcase featured a drawing every 30 minutes that used the tickets student received at the entrance to the showcase. Students whose tickets were drawn were granted a closed course override, which allows them to enroll in required courses that may already be full within the Coles College of Business, Jackson said.

With the indefinite closure of campus beginning Wednesday, March 18, students who attended the showcase will be more prepared to access resources and assistance they may need to utilize in order to succeed at KSU in the coming weeks.