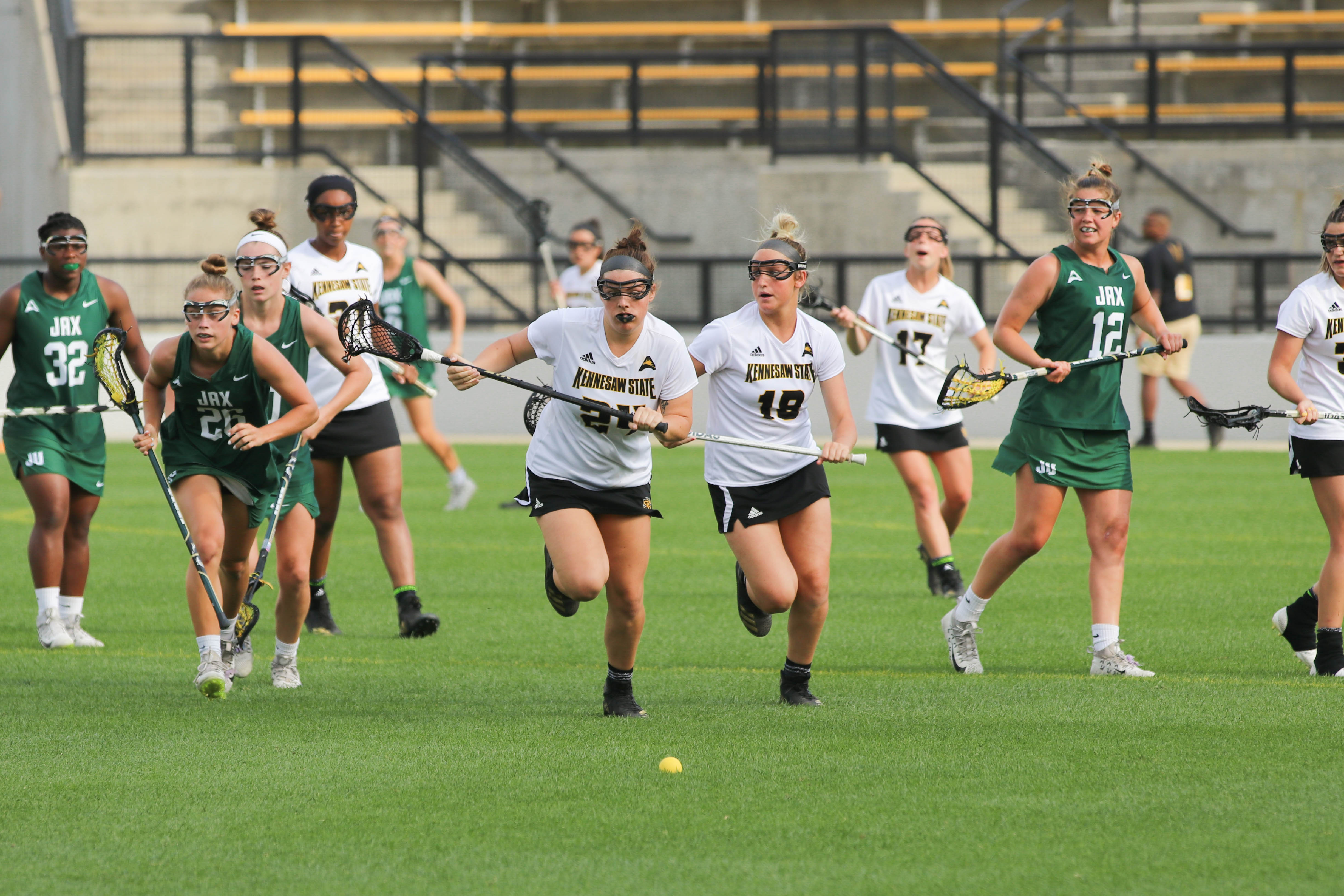 KSU and Stetson players race toward the ball after the halftime break. Photo credit: Ryan Borgerding

Kennesaw State’s lacrosse team captured the fourth spot in the Atlantic Sun Tournament as a big offensive showing led to a 15-6 Senior Day win over Stetson on Saturday, April 20.

Senior Haley Swift started out the scoring for the Owls early in the game, followed by goals from juniors Izzy Palermo and Abby Squires. The Owls scored six of the first seven goals.

Leading scorer for the season Siena Gore led the way in the first half with two goals, including one late with 17 seconds left in the period.

Going into halftime with an 8-3 lead, head coach Laura Maness wanted to maintain the strong defensive play the Owls had shown in the first period, in order to continue to create more opportunities on offense.

“[Our halftime adjustments] were having a bigger sense of urgency when the officials made calls so we could reposition ourselves,” Maness said. “Holding a team to under six goals in a game is a really tremendous effort on the defensive end and allowed us to create well offensively.”

After an early goal in the second half by Stetson’s Marina Rotella, the Owls kept applying the pressure, scoring five unanswered goals to bring the lead to 13-4 going into the last 20 minutes of regulation.

The bulk of the Owls’ scoring in the second half came from Squires, who scored four of the seven goals to bring her season total to 38, which is second on the team behind Gore.

KSU was able to hold the Hatters to two more goals for the rest of the game with a final score of 15-6.

Prior to playing its final home game of the season, the team recognized two seniors on the team who would be graduating after the season — Swift and defender Dana Phillips.

Going into the game, the Hatters held the fourth spot in the ASUN postseason standings, with KSU behind them and just outside of postseason contention. After the win, the Owls have taken the fourth spot and clinched their tournament spot.

Because of the importance of the game, Maness made sure the Owls were fully prepared with their season on the line.

“I feel we had a really good [scouting report] on Stetson,” Maness said. “One of the biggest things we focused on this week was ground balls and guiding those extra possessions and we did well on ground balls and draw controls [during the game] and that was important.”

KSU will play its final game of the regular season Sunday, April 28, as the Owls travel to Washington D.C. to play the Howard Bisons before they prepare for the ASUN Tournament.

Lacrosse struggles in first half, falls to Vermont at home