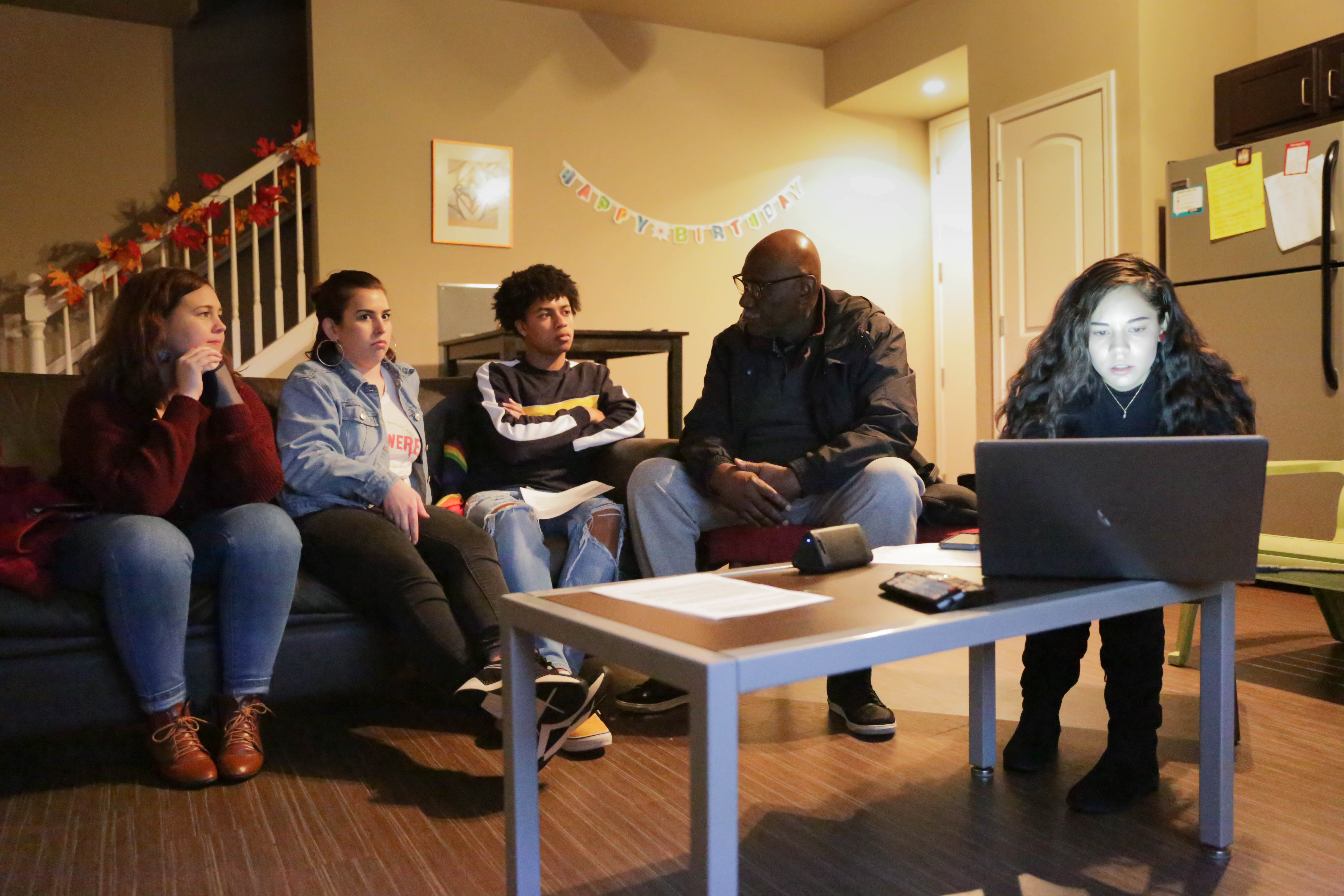 A Kennesaw State student said he is concerned for his safety and the safety of other students on campus after he was the target of a group chat used to share discriminatory language and ideas by KSU students in February.

Elijah John, a 22-year-old marketing major, said he “was livid, furious,” upon seeing that his image was used in a screenshot from the group chat with the caption “Need to call the klan to solve this issue.”

The screenshot was one of the many images that were exposed by other KSU students, which depicted disparaging images of Muslim and Jewish people and racial slurs against people of color.

Alexa Vacca, the lead organizer for KSUnited, held a meeting last Tuesday to discuss the GroupMe screenshots which surfaced the weekend prior. Photo credit: Kevin Barrett

John said he was made aware that his image was used in the exposed images when a friend forwarded him a link to Twitter.

“My initial reaction was, I was very mad, I was confused, I was curious as to who did this — I wanted to find out who the kid was who did this,” John said.

“The entire situation was completely random. I do not know him personally,” John continued. “I may have seen him once or twice, but I never had any interaction or altercation with him.”

John met with university officials on Feb. 11 and was told that the student who made the post of him had voluntarily switched classes. He said that the officials at this meeting did not do much to solve the issue.

“I want the student expelled from school, switching classes is not enough,” John said. “It’s just sweeping the problem underneath the rug and pretending it never existed. If KSU claims that it does not tolerate racism, then they need to punish this kid.”

“Kennesaw State condemns discrimination in any form,” University Spokeswoman Tammy DeMel said. “We are aware of the circumstance on Twitter. We launched an investigation as soon as we became aware of this on Sunday and are continuing to investigate.”

John said he is concerned with his safety and that he is leaning towards having the police escort him to class.

“It’s very scary because KSU allows anyone to carry guns on them, and anyone can just pull up on me,” John said.

Under H.B. 280, concealed carry is allowed on KSU’s campuses, according to KSU’s website.

Further concern about safety was shown on Feb. 12, as rumors circulated that black students were going to be targeted on campus. An alert sent out by KSUPD said that there were no credible threats to the campuses.

Some students were worried when they first heard about this through social media and were not initially made aware of it from the police.

“I feel like there is a huge lack of concern and regard from the university and specifically our emergency responders,” junior psychology major Faith Broughton said. “We could have at least been warned to take precautionary steps.”

“Kennesaw State Police have received several inquiries about safety concerns on our campuses,” DeMel said. “The KSU PD takes all inquiries seriously and is currently investigating.

When asked how KSUPD will keep students up-to-date on the progress of its investigation, DeMel responded with the same statement. She said that there had been no updates to the investigation as of Monday, Feb. 18.

John said that he is working with the NAACP, the Southern Christian Leadership Conference and a campus activist group called KSUnited to help him get his story known.

KSUnited is a group that was created after the #takeakneeKSU movement. Alexa Vaca, the president of KSUnited, said that the student organization exists “because we understand the importance of having students, faculty, staff and alumni coming together to work on changing policy at KSU.”

“We also want to act as watchdogs of administrative suppression,” Vaca said. “Our mission is to fight for the dignity and rights of students, faculty and staff in minority groups.”