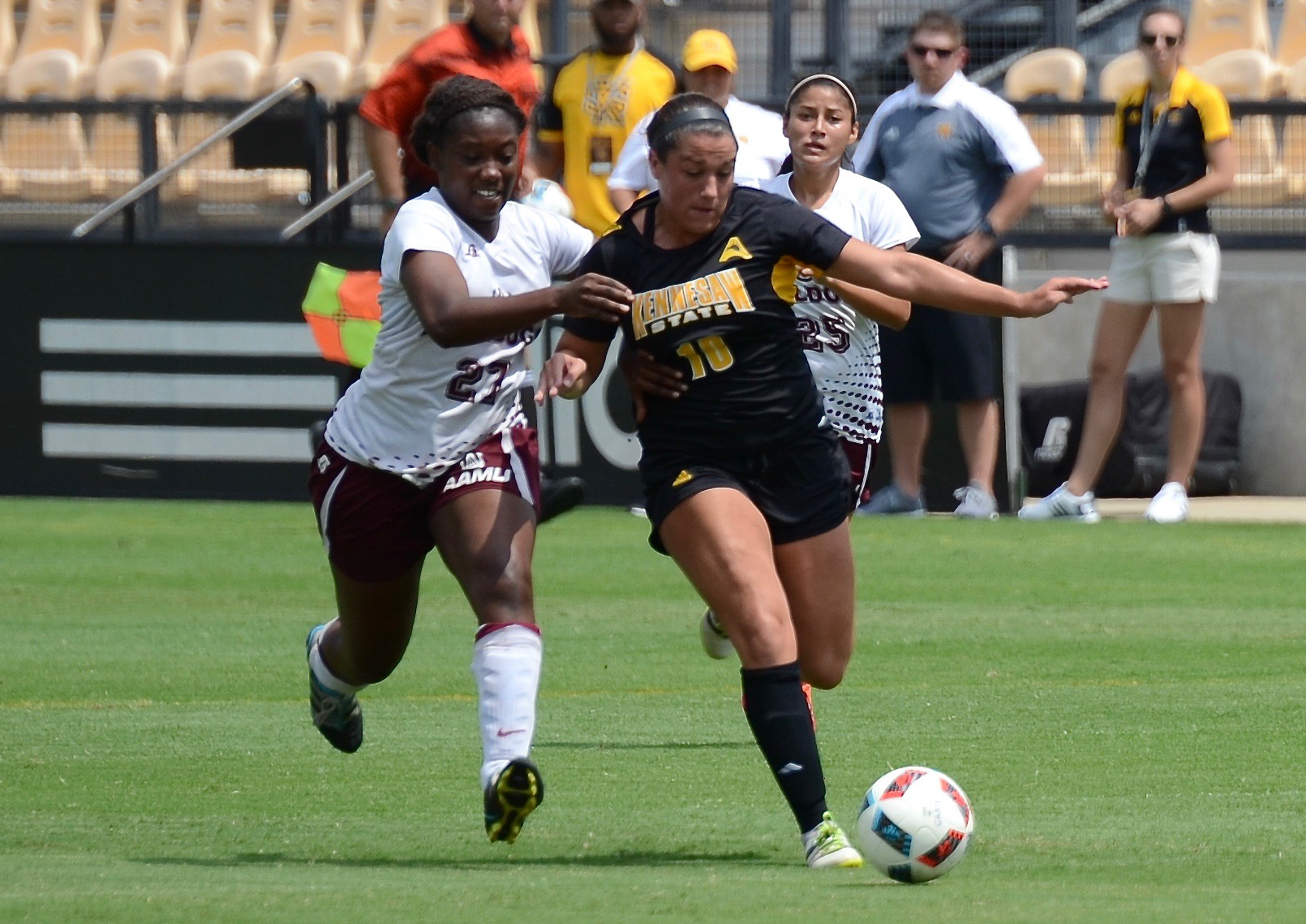 A late score by Georgia Southern University pushed the Eagles to a final score of 3-2 over Kennesaw State University in a women’s soccer match Friday night in Statesboro, Georgia.

The Owls (4-2-1) entered the game strong and scored both goals in the first period.

Sophomore Carly Pressgrove scored her second career goal at the 24:56 mark as she shot from 15 yards out and floated the shot past the Eagles’ goalie Lauren Karinshak to give the Owls a 1-0 lead.

Junior Jessica Sexton provided the second goal less than a minute later as her goal deflected off an Eagle defender to then score from the top of the box to give the Owls a 2-0 lead early in the first period.

Forward Kim Fincher jukes out a defender during a game against Chattanooga on Aug. 18. Photo credit: Katie Hannan

After those first two goals, the Owls struggled to put points on the board for the rest of the match.

“We started off a little sluggish,” said head coach Benji Walton. “I thought we were reacting a little bit as a team. We lost our intensity a little bit when we got our two-goal lead so early.”

After erasing a 2-0 deficit, Georgia Southern (3-2-1) scored the game-winning goal when Sarah Price capitalized on a one-on-one at the top of the box and scored at the 86:06 mark to give the Eagles a 3-2 lead with less than four minutes remaining.

“It was a hard lesson to learn,” Walton said. “You don’t want to learn by losing, but I told the girls after the game, ‘You’ve got to go through this sometimes to get better.’ We had an opportunity to walk away with a win and we didn’t. We’ve got to be better at closing games out and how we keep the ball at times.”

In her third start this year, junior goalkeeper Ashley Zambetti allowed a goal for the first time this season. Georgia Southern managed to outshoot KSU 11-9, while Zambetti saved eight of the eleven shots. This was the second time this season the Owls were outshot by their opponent.

“I think our backline did well to make it difficult,” Walton said. “A lot of their shots, we kept them from long range. That’s what you want to do as a defense: make it predictable.”

Walton noted how great the team looked when the game plan was in action.

“I thought we played outstanding,” Walton said. “But we had moments of lapses and moments of mistakes that came back, and Georgia Southern punished us when we made some errors. They played their game plan just as we thought they would.”